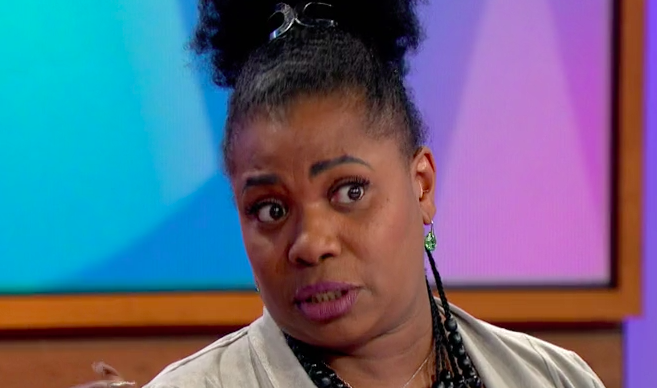 It was all a bit awkward

Brenda Edwards swerved out of the way from Andrea McLean’s grasp on Monday’s Loose Women.

Sitting on the panel, Brenda shouted “No!” and dodged Andrea’s hand as she tried to pet her hair.

The panel were discussing whether they’d ever changed their appearance after a break-up, and the psychological reasons behind doing so.

While Brenda said she hadn’t changed her hair because of a relationship ending, she discussed her various hair transformations through the years.

“I was 25 when I cut my hair off and I regretted it because then I realised as a black woman your hair doesn’t grow back as quickly as what you think it’s going to,” she told the panel.

Andrea asked if she tried wigs.

“I try everything,” Brenda replied. “When I came onto the show last time I had a wig, when I was going through my cancer story I had a wig and then I took the wig off and I embraced the short and now it’s all grown back.

“It’s nice to have the flexibility. I like that,” she added.

Then things got rather awkward.

Andrea remarked: “You do have lovely hair! You just make me want to touch…” and she reached over for a fist of Brenda’s afro.

But Brenda was having none of it, stated a firm “No” and diverted firmly out of Andrea’s reach.

And of course many watchers couldn’t help but take to Twitter to voice their opinions over the Andrea’s rather odd move.

One remarked that it was “awkward” and said that Brenda handled the incident “great.”

While another accused Andrea’s hair touching attempt as an insult to black women.

And a third claimed Brenda was “not there to pet.”

We are not there to pet. They wouldn't do it to anyone else

Andrea seemed to take Brenda’s refusal to have her hair touched lightly however.

Laughing it off, they quickly moved on to other hot topics of the day.

What did you make of this story? Let us know what you think on our Facebook page @EntertainmentDailyFix.