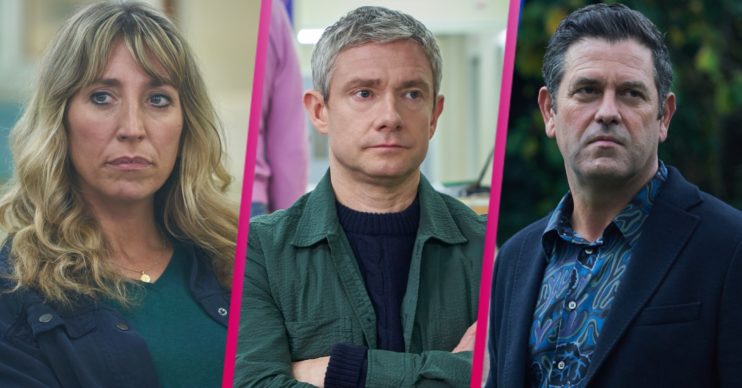 Breeders series two on Sky One: Who’s in the cast alongside Martin Freeman and Daisy Haggard?

The comedy follows the highs and lows of parenthood

Breeders returns to Sky One with a new series this week (Thursday May 27 2021), so who is in the cast alongside leading actors Martin Freeman and Daisy Haggard?

Here’s everything you need to know about the cast of Breeders.

Paul always thought he was a nice guy – until he had children and realised he was an impatient and angry father.

TV viewers will remember Martin fondly as Tim Canterbury in The Office.

His most famous roles since have included Bilbo in The Hobbit franchise, Paul Maddens in Nativity!, John in Love Actually and Everett K. Ross in Black Panther.

Of course, Martin also portrayed Lester Nygaard in the 2014 series of Fargo, and Dr John Watson in the crime drama Sherlock.

Ally is currently managing to balance all aspects of her life…

She is a nurturing mother, a loyal daughter, a skilled business woman and a loving wife.

But, every now and then, something outside of her control threatens to unsettle everything.

Daisy is best known for playing Emmy in Green Wing, Emma in The Persuasionists, and Debbie in Psychoville.

She played Christine Proctor in Ballot Monkeys, Sam in Uncle and Myra Licht in Episodes.

In Back to Life, she portrayed Miri Matteson, a woman trying to reclaim her life after being convicted of murder.

Luke is now 13 and his anxiety has grown with him.

He can be a loner who often finds the world a challenge.

Actor Alex is a relative newcomer to acting.

So far, he’s appeared as Mikey in the Creeped Out episode called Splinta Claws.

Ava thinks hard about science and God and friendship, and is hyper-sensitive to all the emotional currents swirling around her.

Since Luke’s illness, she has felt very protective towards him and tries as much as possible to smooth his relationship with Paul.

Eve Prenella’s only other TV acting credit is as a geeky girl in the recent Sky film To Olivia.

Leah is glamorous and entirely unreliable.

She flits in and out of Ally’s life only when it suits her.

The polar opposite of her daughter, they will never be able to fully understand each other.

Stella Gonet played Beatrice Eliott in The House of Eliott between 1991 and 1994.

She portrayed Jayne Grayson in Holby and Casualty, as well as Mrs Lipsey in Man Down.

She’s recently appeared in The Cry, Traces, Grantchester, and The Salisbury Poisonings.

Jim is solid, dependable and has been happily married to Jackie for 50 years.

He loves his wife, Paul, Ally and his grandchildren, but can obviously never tell them that!

Alun has starred in Year of the Rabbit, Prime Suspect 1973, Little Dorrit and Bleak House.

Darren is played by The Office star Patrick Baladi.

The actor recently played Jimmy Lakewell in Line of Duty.

Before that, he’s popped up in Marcella, Stella and Waterloo Road.

Who else stars in Breeders?