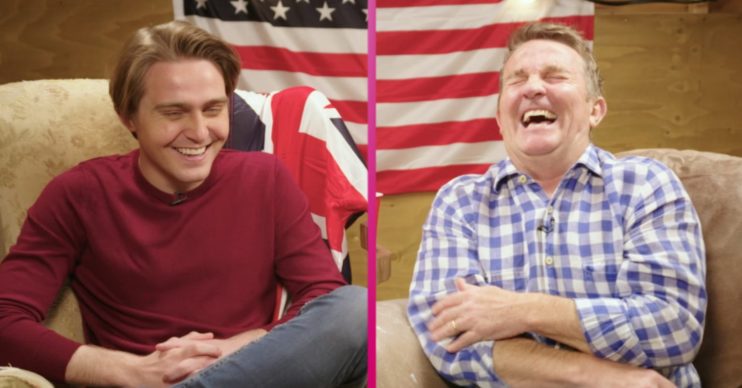 A new series of Breaking Dad is coming to screens in just a few weeks’ time.

ITV has confirmed that The Chase host Bradley Walsh and his son, Barney, will be back on screens for a third series of their popular road trip show.

The tweet included a snap of Bradley gripping a pole over water, while Barnes watches from the sidelines, hands on his head in apparent concern.

What is the new series of Breaking Dad about?

ITV is yet to confirm details of where the new series will take place.

But it’s likely series three will see Bradley and Barney staying closer to home. That’s due to the restrictions in place because of the global coronavirus pandemic.

When does the new series of Breaking Dad air?

ITV has confirmed that fans don’t have long to wait. The new series hits screens in the New Year.

The third series of Bradley Walsh & Son: Breaking Dad will get underway on Monday, January 4 at 8pm on ITV, the broadcaster confirmed on Twitter.

The third series of Breaking Dad isn’t the only treat that Bradley Walsh fans have to look forward to.

ITV has confirmed that a special one-off episode is coming. It will feature previously unseen footage from series one and two, and will be airing over the festive period.

Bradley Walsh & Son: Breaking Dad The Unseen Show will see the duo reflect on some of the best moments from their two adventures in the US.

A description from ITV reads: “Armed with popcorn and refreshments, the Walshes watch back everything from additional unseen footage to moments the boys captured on their phone, behind the scenes clips with the crew and fun compilations of their road trip antics.

Read more: Bradley Walsh: Happy 60th Birthday viewers stunned at how much son Barney looks like a younger him

“These include more sing-along bangers from their brilliant playlist, Brad’s jokes, their favourite snacks, plus quizzes and games they’d play to pass the time.

“As they go on this trip down memory lane, Brad and Barney can stop, pause and rewind at any moment to comment on what they see. Letting us in on even more stories and reactions to what Brad describes as ‘…the highlight of [his] life’.”