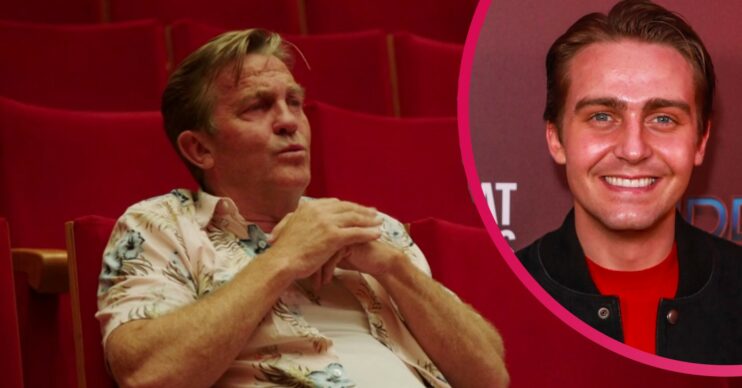 Bradley's reaction is everything!

Bradley & Barney Walsh: Breaking Dad viewers were furious at ITV as the show cut to credits at the worst time during last night’s show (Monday, January 31).

During the half-hour show, the beloved father and son duo went sightseeing in Krakow in a little red car. Barney was driving, whilst Bradley was forced to sit and trust his son to navigate the streets of Krakow safely.

After that, the duo donned wetsuits and went water blobbing in a freezing cold lake.

Additionally, Bradley and Barney went to a theme park, where they got to ride the biggest wooden rollercoaster in the world.

The terrifying-looking ride could reach speeds of up to 120km/h (around 74.5 mph)!

They also went to a dog training centre, where Bradley, in protective gear, was mauled by police dogs in training!

What else happened on Bradley & Barney Walsh: Breaking Dad?

However, the part of the show that got all the viewers at home talking was a beautiful segment at the end of the programme.

Once there, Barney was given the opportunity to play the piano with the Orchestra, something Bradley was keen for him to do.

As Bradley settled into his seat in the auditorium, jazz pianist Barney emerged on stage dressed in a tuxedo.

He then joined the orchestra in a stunning, yet intimate performance of Chopin’s Nocturnes, leading to Bradley barely holding back his tears.

The show ended with Barney’s beautiful piano playing still going in the background, but not all viewers were happy.

Viewers took to Twitter to both praise Barney’s beautiful piano playing, and slam ITV for cutting to the credits during it.

“@itvwhy did you cut to credits during the piano playing? It was beautiful. We wanted to hear it all and see Bradley’s reaction? I was in tears. It was so moving. Please post the full piece somewhere. Thank you,” one viewer tweeted.

“@ITV please let us see more of Barney on the piano, and Bradley a soggy mess watching him,” another said. “And longer episodes too.”

“@ITV can’t believe you cut short #BarneyWalsh at the piano…almost the best bit of the programme,” a third said.

“Faded out during the best bit. Barney playing the piano was super. Well done Barney,” another said.

“Bradley & Barney Walsh make my Monday evenings. Breaking dad should be an hour long. Barney playing the piano tonight was amazing and it was a shame we couldn’t have watched him play for longer,” a fifth wrote.

What did you think of Barney’s piano playing? Leave us a comment on our Facebook page @EntertainmentDailyFix and let us know!