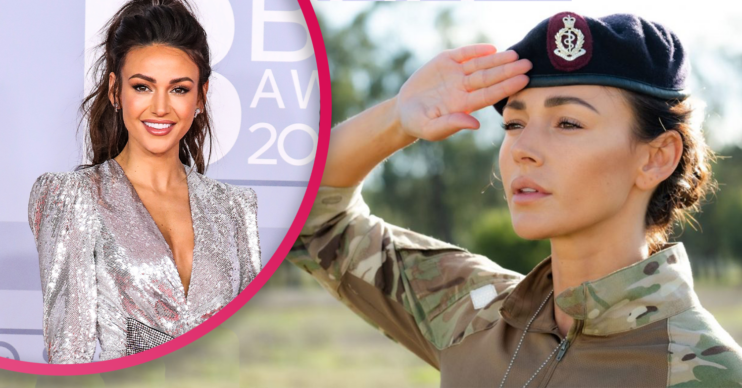 Michelle Keegan spills all the gossip as she appears on The Jonathan Ross Show tonight, including why she won’t do Strictly Come Dancing and how she would “love” to go back to BBC drama Our Girl.

The final episode of Our Girl aired in April 2020, after Michelle stepped down from the role of army medic Georgie Lane after three series and the show was cancelled.

However, speaking on tomorrow’s Jonathan Ross Show (December 4), Michelle teases some good news for fans of the drama.

What did Brassic star Michelle Keegan say about Our Girl?

Michelle, who shot to fame in Coronation Street, was asked which role she’s most proud of role since leaving the soap.

And, despite currently appearing in Brassic, Michelle revealed: “I’d say Our Girl just because I was away from home for a long time.

Read more: Our Girl axed after plans to replace Michelle Keegan with Jacqueline Jossa ‘fell through’

“One of the seasons I did I was living away for eight months. I was in Nepal, Malaysia, South Africa. I had a great time, I was lucky, but it was hard to be away from home.”

Asked if she’d return, Michelle admitted: “Yeah. The door’s been left open for Georgie anyway, so I definitely would.”

She added: “Georgie’s storyline with Elvis came to an end. It felt the right time for her to step back.

“But I would love to go back.”

The show’s head honcho has said that he would give the show a comeback if Michelle was on board, so it looks like a case of watch this space…

One space we most definitely don’t need to watch, though, is the Strictly Come Dancing ballroom.

Why doesn’t Michelle want to do Strictly Come Dancing?

Despite her husband Mark Wright doing pretty well on the show, it’s a definite no from Michelle.

She told Jonathan why.

Read more: Michelle Keegan reveals what she eats in a day and we’re shocked

“I have [been asked] a few times. But for me, it’s the live audience… It’s a skill. It takes a lot of dedication and skill.

“He did it like five years ago. It’s the music before it happens and the audience is really quiet and the lights come on. My heart was in my mouth for him.

“I couldn’t be on the dance floor, too scared, too nervous.”