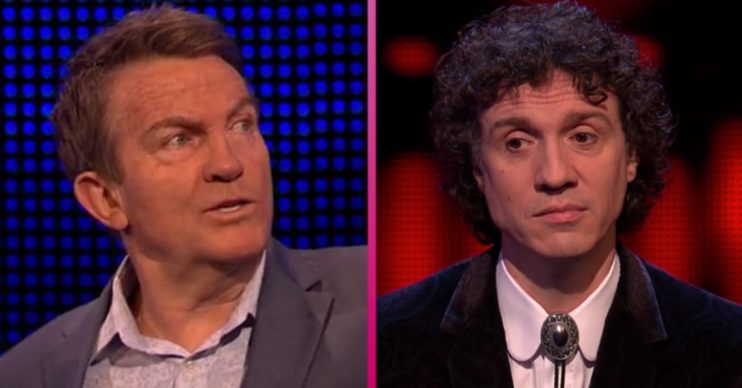 'Just answer the questions... simple as that'

Bradley Walsh put The Chase newcomer Darragh Ennis in his place after nabbing one of his jokes.

The 60-year-old host was left speechless after the Irish quizzer made a gag during Wednesday’s show (April 28).

On the programme, Darragh was up against contestant Laura as she competed for £3000 in the second round.

What did Bradley Walsh say?

As the pair went head to head, Laura became stuck on one particular question.

Reading out the question, Bradley said: “Who was made the patron saint of television for being able to see mass on her wall despite being too ill to attend it?”

The options were St Rose of Lima, St Teresa of Avila or St Clare of Assisi.

Just answer the questions… simple as that

Laura went for St Teresa of Avila, while Darragh chose the correct answer of St Clare of Assisi.

Following the question, Darragh, 40, joked: “So, when they asked her if she was able to see mass and she was Italian she said ‘I see, see.'”

However, his remark didn’t sit well with host Bradley.

The ITV star began to approach Darragh in his chair.

Pointing his finger, he said: “Just answer the questions, you questions, me comedy, you contestant. Simple as that.”

Thankfully, Darragh appeared to see the funny side of Bradley’s gag.

How did The Chase viewers react?

Taking to Twitter, one wrote: “Just answer the questions Darragh leave the comedy to Brad #TheChase.”

Furthermore, a second added: “Ok, that’s a bad joke even for me. #TheChase.”

In addition, a third said: “I quite enjoyed not to be fair. Shocking but funny.”

“Bad jokes are the best jokes,” another commented, while a fifth tweeted: “Nevertheless a good dad joke. It made me laugh.”

Since joining the series, the star has also signed up to celebrity website Cameo.

Darragh charges £25 for a personal message, and fans can request one on his profile page.