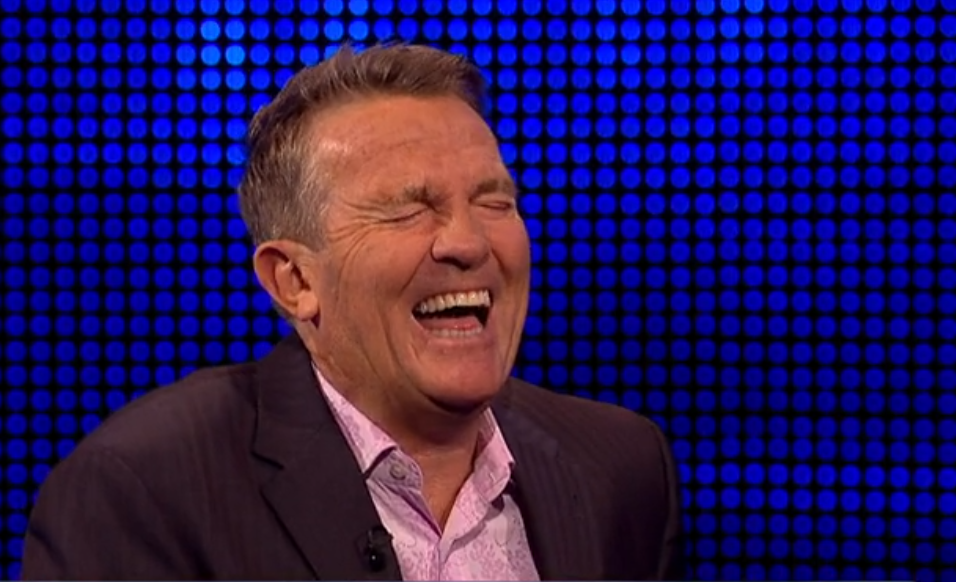 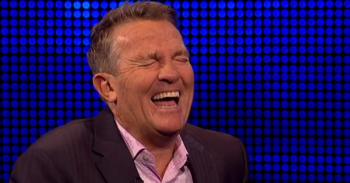 He collapsed onto the game board with laughter

Bradley Walsh was left in hysterics over a rude answer to a question on The Chase last night.

Neil, a bus driver from South Wales, was trying to win some money on the game show and bagged £5,000 in the cash builder round.

As he went head-to-head with Chaser Shaun Wallace – also known as The Dark Destroyer – Neil was asked a range of questions and an answer to one in particular appeared to tickle Bradley.

Neil was asked: “What is the name of the athlete who was the first woman to run the 400 metres hurdles in under 53 seconds?”

Bradley then revealed the first answer was “Marina Stepanova” and the second was “Marina Upandova”.

But the third answer caused quite the stir and the host even struggled to read out the answer.

As he managed to compose himself, Bradley read out the third choice was “Marina Getalegova”.

As Neil and Shaun picked their answer choice, Bradley collapsed onto the game board in laughter.

He said: “Marina Getalegova. I hope it’s that. Brilliant.”

However, the correct answer was actually Marina Stepanova.

Neil managed to get back to the team after successfully defeating The Dark Destroyer.

Neil and teammate Catherine made it through to the final chase and bagged a total of 18 steps for the Chaser to try and beat.

Fortunately for the pair, it was enough steps and The Dark Destroyer was unable to catch them leaving Catherine and Neil going home with £4,000 each.

Neil said he was going to use the money to upgrade his car and treat his four daughters to a holiday.

Meanwhile, during Monday night’s episode of the show, Chaser Jenny Ryan was slammed by viewers for making a “rude” remark about a contestant’s smile.

Prison officer Ricky appeared on the game show and went up against chaser Jenny – who is know as The Vixen – after bagging £3,000 in his cash builder round.

As she walked out on set, she told Ricky: “There are more gaps in your knowledge than there are in your smile.”

Viewers watching from home were left shocked by Jenny’s remark, with many branding it “rude” and “harsh”.

One person said: “I can’t believe the Vixen just told Ricky on the Chase that he has bad teeth!! How bloody rude! She’s no oil painting #TheChase.”

Another wrote: “That was really rude and uncalled for @jenlion you should apologise … #thechase,” while a third added: “CANNOT BELIEVE SHE SAID THAT TO RICKY THATS UNBELIEVABLE. So rude…. #TheChase @ITV.”

Do you enjoy watching The Chase? Leave us a comment on our Facebook page @EntertainmentDailyFix and let us know what you think!