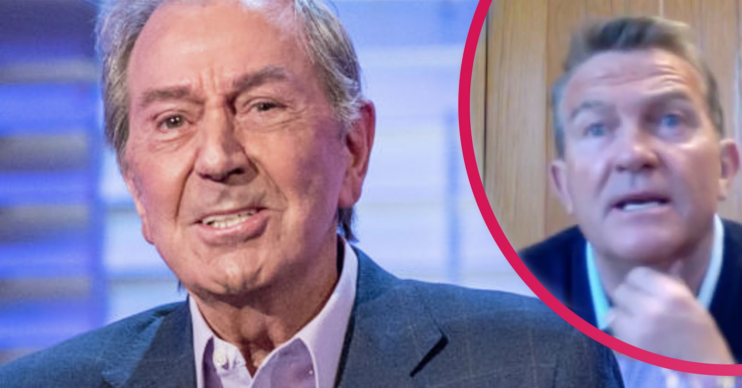 Brad said Des was a giant

Bradley Walsh described the late Des O’Connor as “like a dad to him” and choked up when talking about his idol.

Entertainment legend Des died aged 88 in November 2020, and is the subject of ITV documentary Des O’Connor: The Ultimate Entertainer.

And Bradley credits him for playing a huge part in his career.

What did Bradley say about Des O’Connor?

In an interview on This Morning only two days after Des died, The Chase host Bradley paid tribute to the man he credits for helping him in career.

Appearing alongside fellow legends Jimmy Tarbuck and Tommy Cannon, Bradley disclosed just how close he was to Des.

“A lady once said to him at a show, is Bradley Walsh your illegitimate son?” he told hosts Holly Willoughby and Phillip Schofield.

“And he joked yes and it stayed in his act since, even at the point when he was on the road with Tarby.”

What else did Bradley say?

As he became choked up, he continued: “I’ve got to thank Des because I’m sure I wouldn’t be where I am now in the industry without Des’ input and his love and care.

How did Des become famous?

Des enjoyed a hugely successful 60-year career in which he released hit singles, appeared on some of the biggest stages in the world and hosted hit TV shows.

Aside from his musical career, Des was best known in the UK for his chat show on ITV.

He routinely welcomed some of the biggest stars in the world on to his weekly ITV show in the 1970s, 80s and 90s.

Des O’Connor: The Ultimate Entertainer is on ITV at 10.35pm on Sunday, January 2.