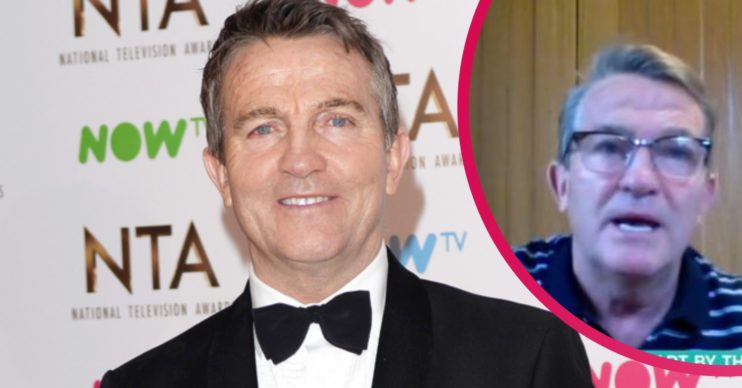 The Chase favourite Bradley Walsh appeared heartbroken on This Morning after he saw the devastation that coronavirus has caused families up and down the country.

The ITV star told viewers from his family home in Essex that he found watching some of the footage “so upsetting” and hard to watch.

The beloved presenter said he had been particularly touched by the case of Ruth, a woman who had not been able to see her son, Sam.

Sam is suffering from Huntington’s disease, and could pass away before he gets to reunite with his mother.

What did Bradley say on This Morning?

“In Ruth’s case specifically, six, seven months having daily contact with Sam and all of a sudden now – zero. He’s in the later stages of Huntingdon’s and it’s so sad.”

Bradley then had to compose himself for a moment as he struggled to get the rest of his words out.

Viewers rushed to share their heartbreak over Bradley’s emotional reaction.

“Bradley Walsh. What a man. He’s genuinely breaking his heart. So sad a story,” said one viewer.

Another wrote: “My heart is actually breaking at this segment, the poor families.”

What is Bradley Walsh doing next?

Bradley Walsh has signed a big-money deal with the BBC to host Blankety Blank, it was reported last month (September).

The deal, said to be worth £2million, will make him the second-highest-paid presenter behind Ant and Dec.

As a result of the big-money pay day, Bradley has leapfrogged over fellow hosts Phillip Schofield, Graham Norton and Match of the Day’s Gary Lineker.

A source revealed that Bradley can “basically name his price”.

They told The Sun: “Bradley regularly polls internally as one of ITV’s most-liked stars. Viewers adore him, and he can turn his hand to pretty much any form of broadcasting.

“When it comes to taking on new work, he can basically name his price.”