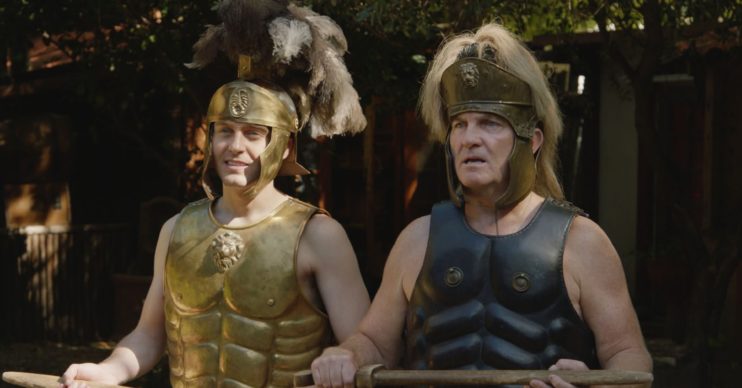 Bradley & Barney Walsh: Breaking Dad – will there be a fourth series?

Bradley & Barney Walsh: Breaking Dad comes to an end this week, leaving viewers definitely wanting MORE of the show – but will there be a fourth series of the popular travelogue?

In the third series, the father and son have travelled across Europe.

Could they be heading Down Under next?

Will there be a series four of Breaking Dad?

ITV has not yet confirmed that they’ll be a fourth series of Breaking Dad… But they’d be mad not to recommission the show.

Barney Walsh recently teased the show could be filmed in Australia next.

The 23-year-old revealed he hopes to take his old man to the Great Barrier Reef one day.

Could the show’s series four be filmed in Oz?

When asked where he would like to take his dad next, Barney explained: “I would love to take dad scuba diving in the Great Barrier Reef.

“I have a PAD license and I love scuba diving. I do it quite a lot when I’m away.

“That would be really cool to take dad to the Great Barrier Reef.”

He added: “It would be great to get him to experience it, I know he’d love it.”

Meanwhile, fans have begged for more of the show.

Addressing the complaints, the duo said it was good their fans were left “wanting more”.

An ITV spokesperson told ED: “We take this as a huge compliment and are delighted that the new series has already had such a great reaction.”

The duo embark on the final leg of their European road trip as they explore more of Italy.

First of all, the pair engage in gladiatorial combat in Rome.

Then they continue south and make a stop to soak up the views from a sky-high zipwire.

Finally, they reach their final stop on the Amalfi Coast, getting the chance to swim in the sea…

But they’ll have to dive in from a cliff!

Where have they been so far?

He persuaded his reluctant dad Bradley to travel with him on a road trip across the USA.

Series one saw the father and son duo embark on a journey to Los Angeles and Arizona, followed by Texas and New Orleans.

In series two, the duo ventured to Florida and the Smoky Mountains, Kentucky and Ohio, and finally to Vermount and Maine.

Series three saw them stick closer to home in Europe – starting in The Netherlands, continuing on to Germany, Switzerland, Slovania and finally ending up in Italy and the picturesque Lake Garda.

It’s not relaxing by the beach sipping pina coladas, though – each instalment sees them undertake often gruelling challenges.

“I’ve never been to the Netherlands and it was great and Slovenia is unbelievable. I loved meeting different people, it was just amazing.”

Do you want a fourth series of Bradley & Barney Walsh: Breaking Dad? Leave us a comment on our Facebook page @EntertainmentDailyFix.