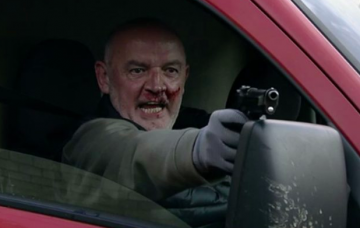 It's bad news for one resident

William Hill bookmakers have revealed who is favourite to be Pat Phelan’s next victim in Coronation Street.

And the bad news is it’s Gary Windass who is looking most likely to be killed off when the psycho builder makes his return to the cobbles.

Read more: EastEnders fans are furious at how Michelle Fowler left the soap

They are currently offering even money that Sarah Platt’s fiance will join Luke Britton, Andy Carver and Vinny Ashford on Phelan’s hit-list.

But his wife Eileen Grimshaw is also looking likely with odds of 3/1.

Ruper Adams, spokesman for the bookies said: “Pat Phelan has many an enemy and there are many who need to be looking over their shoulder.”

“Gary is the red hot favourite but Eileen perhaps knows too much.”

Other contenders include Tim Metcalfe at 4/1 and Seb Franklin at 5/1.

There’s also pretty good odds on departing character Aidan Connor, played by Shayne Ward, being bumped off by Pat with odds of 10/1.

As we all know by now Corrie residents think that Pat is dead after falling into the Irish Sea while on holiday with Eileen.

Well, we say fallen but Eileen actually had a hand in his death drop by crunching his fingertips as they clung on for dear life.

Phelan actually survived the fall, albeit a bit battered and bruised and has been holed up in a B&B in Ireland.

But he’s heading back to the cobbles to settle some old scores with those who’ve betrayed him.

And we can’t wait for Phelan’s last stand!

Who do you think Phelan will kill next? Leave us a comment on our Facebook page @EntertainmentDailyFix and let us know what you think!