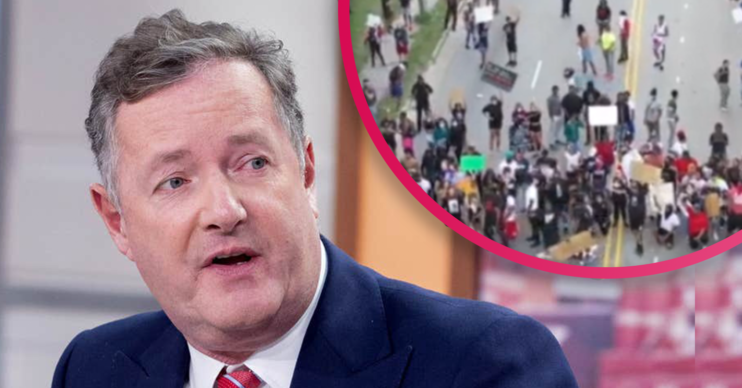 However, while all presenters backed the movement, they revealed their concerns regarding a spike in COVID-19.

Piers Morgan, Dr Hilary Jones and Lorraine Kelly all expressed their worries for those taking part in the marches.

“I was all for the protests yesterday in Hyde Park and I think it’s the right thing to do to show solidarity,” explained Piers.

“But look at the last of social distancing by thousands and thousands of people.

“This reminded me of the Cheltenham Festival.”

“You’r protesting about the death of somebody who is from the BAME community.

“We know a lot of the people in that crowd are from the BAME community who are more at risk.

“And yet they are ignoring all of the social distancing rules to protest about the death of a black man.”

Research from Public Health England has revealed that Black, Asian and Ethnic Minority (BAME) people are twice as likely to die from COVID-19 compared to white British people.

Black men in particular are up to three times more like to catch coronavirus than white men.

Dr Hilary Jones echoed Piers’ comments by showing his support for the movement.

However, he also highlighted the health risks of ignoring social distancing.

“If your heart rules your head, the virus spreads.

“We had 359 deaths yesterday from COVID-19 – that’s more than every other European country combined.”

Dr Hilary added: “Lockdown has now eased but the disease is just as prevalent, probably more prevalent than it was at the beginning of lockdown.

“There are thousands more cases every day and we’re still seeing deaths in people who have been in hospital for a long time.”

Agreeing with her co-stars, Lorraine admitted she was. “worried” about the lack of social distancing as well.

Been social distancing since March. Today I broke it to join the #BlackLivesMattter demo outside Parliament and take a knee with thousands of brave young people calling for Justice. pic.twitter.com/1KWZeOPi01

Piers in particular was angered by Labour MP Barry Gardener who joined the BLM protest yesterday.

He added: “For a member of Parliament to boast about breaking the social distancing rules, well, no wonder nobody else bothered to observe them.

“I support the protest but I cannot support what I saw there.

“And I certainly can’t support what I saw from the MP Barry Gardener.”