Births, deaths and other departures in Coronation Street this spring!

Coronation Street will be seeing a lot of changes over the coming weeks with several BIG name stars bidding farewell to the cobbles.

And with some brand new arrivals heading to Weatherfield too, it can be a bit hard to keep track of all the comings and goings. Luckily Entertainment Daily is on hand with this comprehensive list of who’s out and who’s in this Spring. 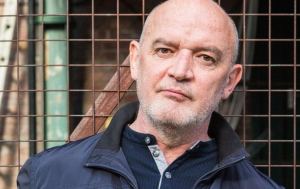 As we all know by now, Corrie’s most prolific killer survived his fall into the icy waters of the Irish Sea and is currently holed up in a B&B plotting his ultimate revenge on those who wronged him.

Phelan will be heading back to Weatherfield for a final stint (rumoured to be around the same time as the Britain’s Got Talent live finals) and his real comeuppance.

According to soap lore Phelan should die a grisly death for his crimes, but what everyone is wondering is if he takes one final victim with him when he meets his maker?

There’s some pics knocking around of Pat laying into Gary Windass with a baseball bat after Gaz tracks him down to a camper van in the coming weeks.

Will Gary be his final victim? 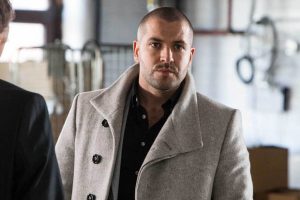 We were all pretty surprised when it was announced that Shayne Ward would be leaving his role as Aidan Connor later this year.

It’s rumoured that former X Factor winner Shayne will be heading over to America to have a go at cracking Hollywood.

No one knows exactly how Aidan leaves the Street, but Corrie fans seem to think he’ll be heading off in a body bag rather than a cab. Noooo!

They’ve come to this theory because Aidan has been acting very strangely since he had the op to donate one of his kidney’s to his half-sister, Carla.

He was seen sobbing in his hospital bed straight after the op and then suspiciously hid a letter last week. He’s definitely not telling his family something. Is he dying? 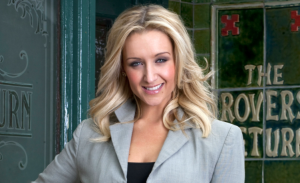 While we’re pretty sure she isn’t being killed off – apparently Corrie bosses are keen to leave the door open for Cath to return at some point -nothing in Soap Land is ever certain.

She’s currently very pregnant and about to hide herself away in a cottage so no one realises (although how everyone has missed her ginormous bump so far we’re not sure) so there’s always the chance that something could go wrong in childbirth. 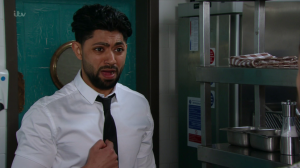 Currently nursing a broken heart after discovering wife Rana has been having a secret affair and has fallen deeply in love with Kate Connor, there isn’t much of a future left for Zeedan on the cobbles.

He dreamed of having a family with Rana and having his own business, but both of those have – or are about to – go out the window.

It was revealed Qasim was bowing out of his role earlier this year but will Zeedan head off into the sunset to try and make his dreams come true somewhere away from Weatherfield?

Or could Kate kill him in a crime of passion?

It feels like she’s only just come back to the Street but Rosie Webster will be leaving us again in the not-too-distant future as Helen Flanagan heads off maternity leave.

Helen is expecting her second baby with footballer boyfriend Scott Sinclair which means she’ll be taking a break from Corrie.

We’re not sure how she’ll be written out, but as it’s Rosie she’ll probably become Insta famous and head off around the world documenting her travels on the ‘gram.

That’s what we’d do if we were Corrie writers anyway. 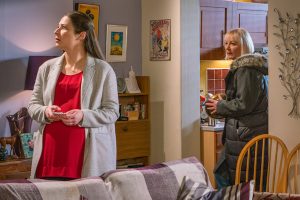 It feels like Nic has been preggo forever right? And she’s so massive it can’t be long before she gives birth to the baby she’s expecting with one-time fling Gary Windass.

We’re predicting a dramatic birth because when is there any other kind in soap, but will the baby’s granddad Phelan get to see his grandson before his final departure?

It’s also worth remembering that the sprog has Phelan’s DNA – could we be looking at a future demon child like ‘Enders’ Bobby Beale? 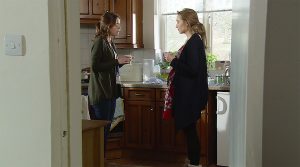 She looks like she’s about to pop any minute but Eva told Aidan she’s seven months pregnant this week which means we’ve got around two months before we meet baby Connor.

But who will be taking Eva’s baby girl home?

She’s still got her deal in place with Toyah Battersby after a mistrustful Aidan sent her packing, but Eva has definitely started to bond with her daughter.

Someone will be left heart-broken, that’s for sure.

Enjoy this? Let us know by commenting on our Facebook page @EntertainmentDailyFix!