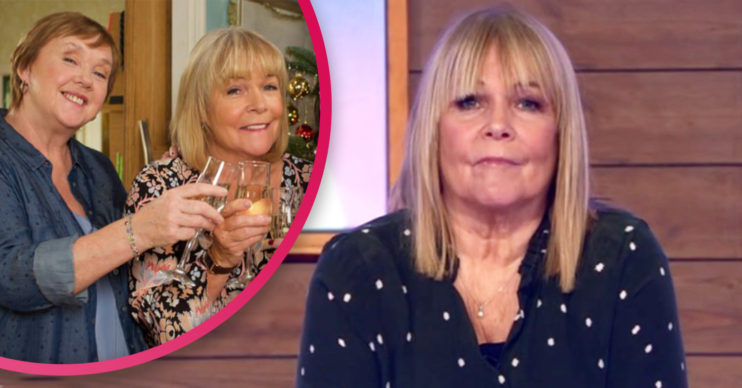 She said it was Pauline's 'choice' to leave

And there have been fierce rumours of a rift behind the scenes between the ladies, who have been friends for more than 50 years.

However, Linda has now broken her silence on the subject.

What did Linda Robson say about Birds of A Feather?

Speaking to the Express, Linda revealed it was Pauline’s decision to leave Birds of a Feather.

She said cast members and the audience have to “respect” that it was Pauline’s “choice” to leave.

Obviously people miss Pauline, but we have to respect that it was her choice not to do it any more.

Pauline had played Sharon Theodopolopodous in the show since 1989.

Linda, who plays Tracey Stubbs, revealed: “Obviously people miss Pauline, but we have to respect that it was her choice not to do it any more. She wants to concentrate on her academy.”

Birds of a Feather Christmas special: ‘We did the best we could’

The rest of the cast, including Lesley Joseph, who plays Dorien Green, were pleased to take part in the 2020 Christmas special.

And Linda admitted that they did “the best we could” in Pauline’s absence.

She said: “When they [the producers] asked us, we were like: ‘Yeah we would still like to do it. We’re not ready to finish.’

“I think it worked really well as they did a good script, and we did the best we could with it.”

What are the rift rumours?

Rumours of “tension” behind the scenes were blamed for Pauline’s absence.

According to an insider, “real and tense issues” were the reason Pauline didn’t take part in the 30th anniversary special and later the 2020 Christmas special.

Her character Sharon was written out, with scriptwriters revealing she was “stuck on a COVID cruise”.