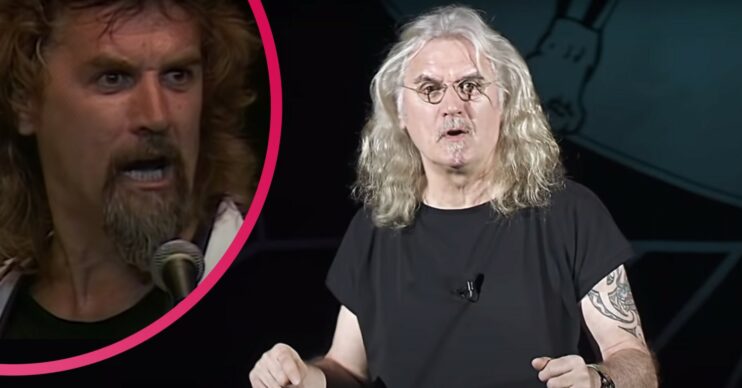 Billy Connolly My Absolute Pleasure: The Big Yin won’t fear death – ‘It might be so lovely on the other side’

Sir Billy Connolly, one the greatest comedy stars ever, regards himself as retired due to his health.

However, a TV special titled Billy Connolly: My Absolute Pleasure airs on ITV this Christmas.

The Boxing Day programme follows up on 2020’s It’s Been A Pleasure, which marked his decision retire after a 50 year comedy career.

But how is Billy, who suffers with Parkinson’s, doing with his health in 2021?

Billy Connolly and his health in 2021

Despite his diagnosis, Billy has remained inspirationally upbeat when discussing his health.

He previously reflected in 2020 special Billy Connolly: It’s Been a Pleasure that he had accepted what will happen in his future.

However, Billy remained resolute he would not be defined by Parkinson’s.

Back in October, Billy admitted he felt “cheated” by his condition, to an extent.

However, he remained determined to focus on the present.

But he also indicated he is at peace with his ultimate fate – and even hoped for spiritual positives.

‘It hasn’t happened yet’

Billy said to the Observer: “But it hasn’t happened yet. So how can I have been cheated?

“And who knows? It might be so lovely on the other side that you don’t ever think about that.”

It might be so lovely on the other side.

Billy also indicated his views on an afterlife had changed due to his condition.

He pondered he was “sure there’s something”.

Billy explained. “I don’t know, in recent years, I’ve just got a feeling that there is. That we don’t just turn to [bleep]. Maybe this is my refusal to accept something so mundane.”

Despite his positivity, Billy has admitted to facing health challenges.

In August he indicated his left hand moves involuntarily – but insisted it isn’t “much of a problem”.

And in October he revealed he can longer write.

He said: “It breaks my heart as I used to love writing letters to people.”

Billy continued: “My writing went down the swanny and is totally illegible.

“So I had to find a way to record everything. But then the recorder didn’t understand my accent so it kept collapsing and my family would have to sort it. It was a club effort!”

He added, during the appearance on The Graham Norton Show: “It’s creeping up on me and it never lets go.

“I walk like a drunk man and have to have help. So, life is different, but it is good.”

What happens in Billy Connolly: My Absolute Pleasure?

Cameras follow Billy in his new home in the Florida Keys.

He also shares his favourite stand-up routines – including previously unaired footage – from his live tours with fans.