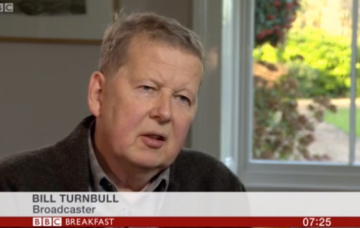 BBC presenter Bill Turnbull has made a rare appearance on breakfast television to speak about his “unbearable” chemotherapy.

The TV favourite was diagnosed with incurable prostate cancer in November 2017.

He told former colleague Graham Satchell: “You have a few days where you’re in shock and then you have a few weeks that are pretty dark.

“On this day when people are watching, there will be hundreds of people in Britain who will get a diagnosis. Hundreds.

“All I can say to them is hold tight, and things will – they won’t get better, but it won’t be quite as dark as it is now.”

Bill, 62, has been credited with raising awareness resulting in an increase in men getting treatment for the cancer, alongside Stephen Fry.

During Bill’s pre-recorded segment, he met Carl Skinner and his daughter, Lisa, who went to see a GP after hearing the presenter’s own story and thanked him for being so open about his illness.

“I was watching BBC Breakfast one morning and the news story came up about Bill Turnbull,” Lisa explained.

“Some of the symptoms that were discussed that were typical of that sort of cancer, and that rang a few alarm bells for me.

“Dad had mentioned in passing ‘I’m a bit tired, I keep having to get up.’ I said ‘Can I ring the GP’ and he said ‘If you do it yeah.’ So I phoned the GP the same day.”

Carl was diagnosed with stage 3 prostate cancer and, with treatment, is now on route to being given the all-clear.

“Thank you so much, it was a very brave thing you did. We feel hugely indebted to you,” Lisa added.

Host Louise Minchin then explained to viewers: “Now Bill said, as ever the modest man, that he’s done one useful thing in his life.

“He also, I know, kept many, many hundreds of thousands of you company over all the years he was working with us on BBC Breakfast.

“So thank you Bill for that, and for everything you’ve done. I know many people will think maybe I should get checked, so that’s a really important thing to do.”