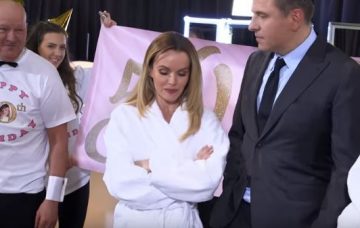 Amanda Holden got pranked on Britain’s Got More Talent when her fellow judges helped her celebrate her “50th” birthday.

A fuming Amanda insisted she’s only 47, but Simon Cowell said that is just her “showbiz” age and that she’s really three years older.

Stephen Mulhern, who hosts the BGT spin-off show on ITV2, entered the judging panel’s backstage area carrying two silver helium balloons in the shape of a five and a zero.

Stephen was joined by members of the production crew who had a 50th banner and a cake, as everyone joined in singing ‘Happy Birthday To You’.

Horrified Amanda looked in disbelief and said: “Oh my God, I’m only 47.”

But Simon, 58, told her: “I think we all know that in the entertainment business, we have what we call the ‘work age’ and then the real age.”

Asked by Stephen what she would like to say on her “big day”, Amanda replied: “I hate you all.”

David Walliams teased her even more by asking, “What do you wish for? Another 80 years in show business?” at which point she gave up protesting and went along with the joke.

After blowing out her candles, Amanda was asked by Stephen to reveal her wish to everyone. Then, Simon suddenly clutched his chest and pretended to collapse in a chair.

The More Talent presenter then handed Amanda the cake knife which she brandished while chasing him out of the studio, as Stephen pleaded: “Amanda, don’t be stupid!”

Which do you think is best? The main BGT show on ITV or the More Talent spin-off on ITV2? Leave us a comment on our Facebook page @EntertainmentDailyFix and let us know what you think!