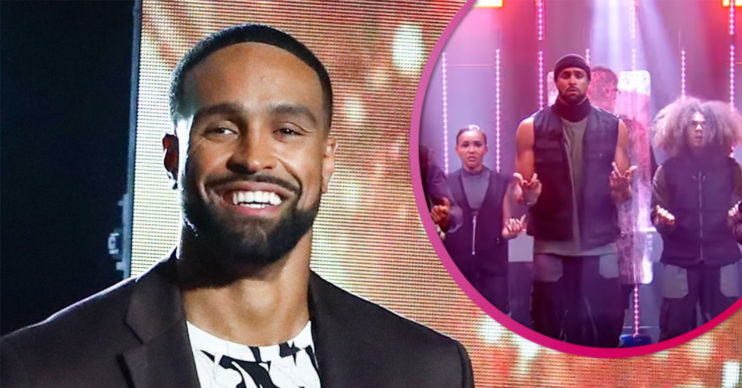 BGT SPOILERS: Ashley Banjo all smiles as he returns to stage after Diversity backlash

A recent performance sparked over 15,000 complaints

BGT star Ashley Banjo is all smiles tonight as he returns after the recent Diversity backlash.

The dancer, who is filling in for Simon Cowell during the semi-finals, along with his Diversity co-stars have faced criticism for their Black Lives Matter performance.

The powerful routine has sparked over 15,000 Ofcom complaints.

The performance recreated a white police officer kneeling on Ashley, which was in reference to the death of George Floyd in America.

The dancer recently spoke out against the criticism and defended the routine, saying “silence was never and will never be an option”.

Despite the backlash, Ashley looked unfazed as he joined his fellow judges during tonight’s second semi-final show, which is pre-recorded.

Ashley recently hit back at a post which told himself, Anthony Joshua and Lewis Hamilton to stop talking about racism.

Seemingly created by a troll, the post said: “Dear Joshua, Hamilton and Banjo and any other Black public figures.

“We the Great British Public will only support you if you entertain us and do not say anything about racism.

“Thank you for your understanding.”

Meanwhile, Ashley said: “For the people sending this: 1. You do not represent or speak for the Great British public.

Silence was never and will never be an option

“2. Silence was never and will never be an option. 3. Change is inevitable… Get used to it. #Diversity.”

What did Alesha and Amanda say?

In the comments section, Amanda posted a heart emoji.

Meanwhile, Alesha wrote: “They can kiss my black ass!”