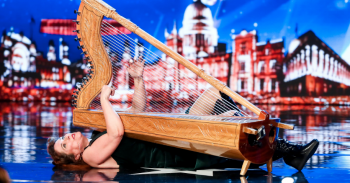 BGT judges stunned as contestant ‘gets off’ with a harp

Is this Britain's Got Talent's oddest act yet?

Britain’s Got Talent is known for its bizarre auditions, and this week seems no different.

All four judges are set to be utterly confounded as one contestant appears to ‘get off’ with a harp.

Read more: Everyone is making the same joke about Alesha Dixon on BGT

That’s right, contestant Ursula Burns, 48, will be seen straddling  a giant harp as she gracefully drums its strings.

But one judge will be particularly intrigued by the performance – and perhaps even a little bit jealous.

“This lady is barking mad in the best way possible. She’s getting off with a harp, and I need to get me some of that!” judge Alesha Dixon says.

And veteran judge Simon Cowell is left just as shocked saying: “God. That, I’ve got to tell you, don’t judge a book by its cover.”

And this isn’t the only odd audition so far in the series. Last week saw a magician, dressed in black and disguised with a plain white mask, test Ant and Dec’s close friendship.

The mysterious contestant asked Ant and Dec to complete a series of tests testing their connectivity.

One included them both being asked to draw something – and they both wrote the year 1989.

The year supposedly represents their friendship, which does indeed date back 30 years.

Britain’s Got Talent returns to ITV tonight at 8pm.

What do you think of the harp player? Let us know what you think over on our Facebook page @EntertainmentDailyFix.