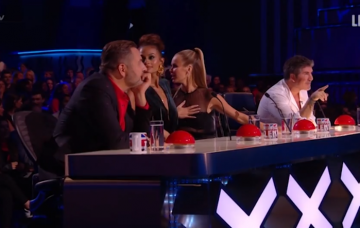 The Britain’s Got Talent judges were shocked on Tuesday night’s show when an intruder ran onto their podium and hit their red buzzers.

Host Declan Donnelly apologised to viewers after the invader appeared, sprinted across the judging panel and hit three of the four buzzers.

Judges Amanda Holden and Alesha Dixon – who had been giving feedback to act Magus Uptopia – shrieked as they jumped out of their seats with shock, while security chased the intruder.

Simon Cowell was left with his head in his hands as he said: “Oh great. This is one of those nights.”

He added: “Back to where the focus should be, on the act.”

Music mogul Simon then asked magical duo Magus Uptopia if it was part of their act.

The pair confirmed that it wasn’t part of their act as Simon added: “Well you never know.”

Speaking to the invader, he said: “By the way for you,” before hitting his buzzer again and appeared to give them the finger just as the camera moved away.

The audience were left cheering and clapping.

This isn’t the only incident the show has had during this week’s live shows.

On Monday night, the show went off air for almost 15 minutes due to technical issues.

An ITV announcer said: “We’re having some issues – we hope to return to the show as soon as possible.

“We hope to return as soon as possible and we are working to fix the issue.”

Eventually the show returned and Dec apologised for the gaffe and blamed the issues on London’s bad weather.

He said: “Welcome, back the weather has caused some technical difficulties so apparently some of you didn’t get the first part of this episode at home.”

Joining Donchez is 10-year-old singer Calum Courtney, whom the judges chose to send through to the final.

Who was your favourite act on last night’s show? Leave us a comment on our Facebook page @EntertainmentDailyFix and let us know what you think!