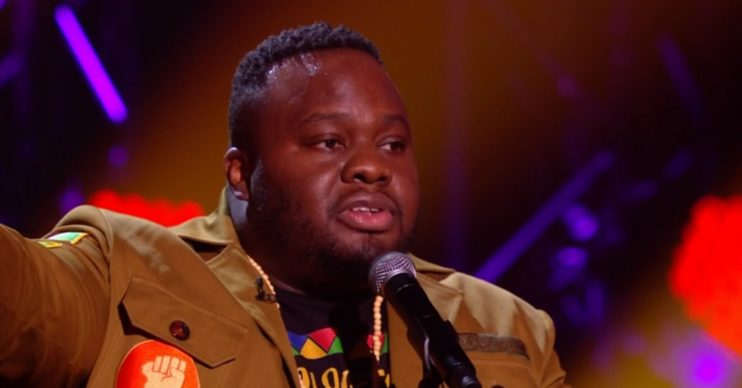 Britain's Got Talent viewers were once again divided over the funnyman

Nabil Abdulrashid used the BGT final to take a swipe at those who complained about him as he joked they aren’t able to write words.

At the beginning of his routine in the Britain’s Got Talent final, the comedian tore straight into the Ofcom complainers.

What did Nabil Abdulrashid say in the BGT final?

“They complained because we said black lives matter. Thousands of complaints. To be honest with you, I’m shocked that that many of them know how to write.

How did Britain’s Got Talent viewers react?

Some of those watching at home loved Nabil’s routine, whereas others took issue.

One said on Twitter: “Get the racist ‘comedian’ off @BGT @Ofcom #BGT.”

Hopefully if I annoy them today, they can progress on to words.

Another tweeted: “@Nabilu roasting racists, oh I LOVE to see it! @bgt #bgt.”

A third said: “#bgt didn’t think he was funny in semi-final… not funny again.”

A fourth wrote: “Nabil already taking the [bleep] out of the complainers and the R’s, they are probably reaching for their phones as we speak. Good for him I say #BGT.”

Someone else said, with a laughing crying emoji: “Oh this performance will break Ofcom #bgt #bgtfinal

A sixth put: “Nabil, once again trying hard but not brilliant material #BGT.”

“Please stop watching if you are offended,” said another, adding: “You lot are bored. BLM for life.”

Nabil , once again trying hard but not brilliant material #BGT

The star joked that no one can retrain him. It was in reference to the chancellor’s recent suggestion that those in industries hit hard by the coronavirus pandemic could retrain for a new profession.

It follows criticism over the line-up in the final on social media.

What did you think of Nabil’s performance tonight? Leave us a comment on our Facebook page @EntertainmentDailyFix and let us know.