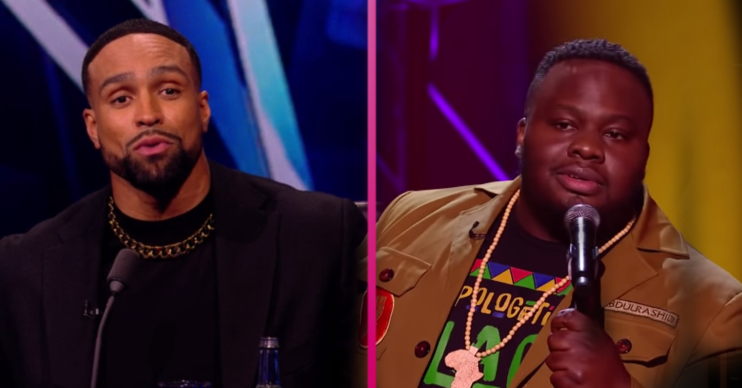 Diversity dancer said he was "proud" of him

He may not have won the BGT grand final last night (Saturday October 10), but stand-up comic Nabil Abdulrashid certainly found a friend in judge Ashley Banjo.

The London-based funnyman sparked 700 Ofcom complaints after last week’s semi-final thanks to a routine that took down racism.

And judge Ashley, 32, praised the comedian after his final act.

What did Ashley Banjo say to Nabil?

Ashley – who attracted over 27,000 complaints after Diversity’s powerful anti-racism routine earlier in the series – paid tribute to Nabil.

“I know what it’s like to get a few complaints!” he joked.

“There are two ways you can react, you can bend to pressure or you can be unapologetically yourself.

“And it’s pretty obvious to me which one you chose! It’s not even about being black, it’s about being unapologetically you.

What else did Ashley Banjo say about Nabil?

Ashley continued: “Why would I be afraid of a comedian making us laugh in his own way in his own style? What, because some people might get offended?

“No way, I am proud, and whether people find it funny or not, I am proud that you have had this chance on the Britain’s Got Talent final doing you – and not bowing to the pressure, respect for that.”

After the complaints, Nabil said he received vile abuse online and even received death threats.

What did Nabil say in his act?

Nabil began his hilarious routine by saying: “Glad we’re here, thought we wouldn’t make it. Lots of complaints, a lot of complaints.

“They complained because we said black lives matter. Thousands of complaints. To be honest with you, I’m shocked that that many of them know how to write.”

Although Nabil’s gags went down well with the judge’s he lost out to singing comedian Jon Courtenay for the top prize.

Variety performer Steve Royle cam in third place, and Sign Along With Us were in second.

What happened to Ashley?

As Ashley said, he’s no stranger to being on the end of Ofcom complaints.

Subsequently, the act – which referenced the murder of George Floyd – attracted over 27,000 compliants.

Ash also told of his own abuse and death threats.