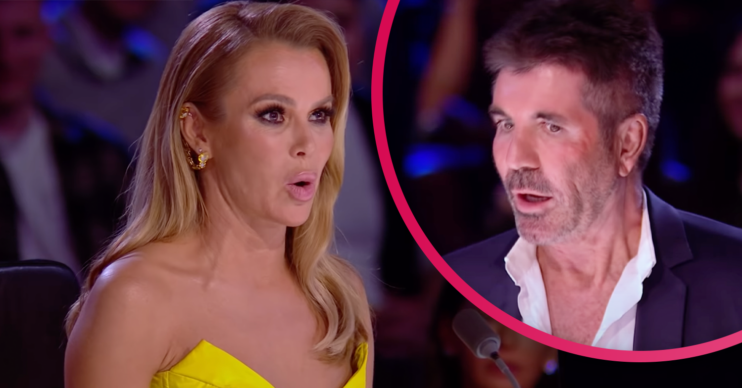 You'll do what, Amanda?!

However, it seems he wasn’t judge Amanda Holden‘s winner, with the star declaring her support for singing history teacher Tom Ball earlier in the night.

Tom impressed Amanda with his final song of the night, his rendition of Sir Tom Jones’ I Who Have Nothing.

So much so that she announced she would “eat her knickers” if he didn’t win.

After Tom’s performance, Amanda declared she was “dead”.

“That was an unbelievable, unforgettable performance.”

It was then that she made her bizarre claim.

“And if you’re not at the London Palladium by the end of the year I will eat my knickers.”

And so, it seems, were the viewers at home.

“Has Amanda not got enough food in the fridge that she will eat her knickers?” asked one.

Amanda eating her knickers wasn’t what I wanted in my mind on a Sunday night.

“Amanda eating her knickers wasn’t what I wanted in my mind on a Sunday night,” said another.

“So Amanda is going to eat her knickers? Not the right words to go by but we move on!” said a third.

“Amanda says she’ll ‘eat her knickers’ if he isn’t at the London Palladium by the end of the year,” another started.

“First off, I doubt very much you even wear them. Secondly, this entire final is being filmed at the Palladium, you unfathomable fool.”

Err, except it wasn’t – the live shows were actually filmed at London’s Eventim Apollo Hammersmith!

Although the auditions were filmed at the London Palladium, so technically Tom has already performed there!

Simon Cowell, the show’s head honcho, perhaps summed up what Amanda actually meant with his comments to Tom.

He said: “Whether you like that type of music or not, it doesn’t matter.

“Talent is talent and I’m really now seeing your lane which is West End, leading part.”

Did the right person win the BGT 2022 final? Tell us on our Facebook page @EntertainmentDailyFix.