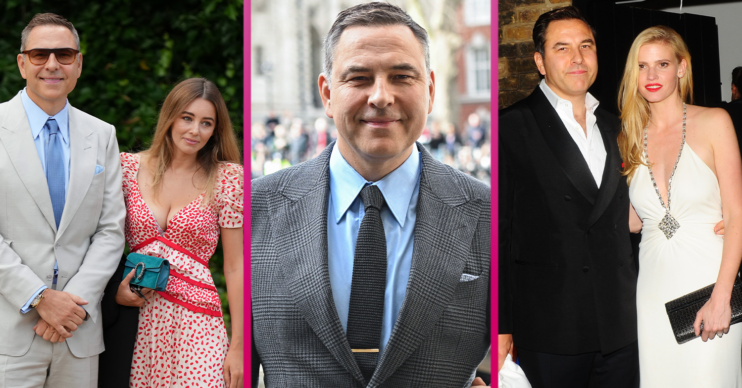 The BGT star is believed to have finally settled down

BGT star David Walliams has been linked to several famous women in his past.

The ITV star has had his fair share of romances and even started a family, but sadly nothing seemed to last.

But just who has the Britain’s Got Talent judge enjoyed flings with?

David has dated an array of famous ladies, from the likes of Patsy Kensit to a Spice Girl.

In 2004, David was linked to Patsy after being introduced by mutual friends at a party. Despite this, Patsy appeared to rubbish the claims in her autobiography when she failed to mention him.

In 2006, the BGT judge confessed that he had his heartbroken by a mystery woman. At the time, he would only refer to them as “Miss X”.

However, the mystery came to an end when Lisa Snowdon came forward and said it was her.

“I was hoping no one would realise,” she said when confessing it was her. “David and I are great friends and he is such an amazing bloke, but there is no romance.”

In 2008, David was reported to have been seeing Spice Girl Geri Horner in secret. However, sadly neither confirmed their romance publicly.

ITV star meets the mother of his child

Following their rumoured fling, David when on to strike up a romance with model Lara Stone.

Their love story began in 2009 and quickly became heated. They got engaged the following year and tied the knot a few months later.

Things looked good between the pair, and in 2013 they welcomed their first child together, Alfred.

Sadly, things didn’t work out. Two years later in 2015, they announced their separation when David filed for divorce.

David appeared to remain single for a while afterwards.

However, he was eventually spotted on a dinner date with Norwegian model Sylvia Flote. But the pair didn’t seem to last long.

Is the BGT star gay?

David has previously opened up about his sexuality too. Following rumours he was gay, David confirmed he has had experiences with men.

He said in 2017: “It’s a bit of both. I don’t know why anyone would rule [a relationship with a man] out. Why would anyone say that’s never going to happen?

“I do love women and I’m attracted to women, but sometimes I think it would be simpler if I wasn’t – because people think I’m gay and I’m camp.”

David later added: “I had gay experiences growing up, which I enjoyed. I was a teen and in a lot of all-male environments. I am naturally very camp.”

Who is David Walliams dating now?

David is rumoured to be back with his ex-girlfriend, Keeley Hazell.

The pair had previously been connected back in the 2o00s. However, they have since been spotted together in recent months.

However, David has yet to announce their romance publicly. He did, however, make reference to their friendship on Instagram.

“Happy Birthday to my beautiful friend @keeleyhazell who is 57 today,” he joked on Instagram.

David and Keeley also attended his pal Ant McPartlin’s wedding together in August 2021. At the time, they were seen linking arms together.

Britain’s Got Talent next airs on ITV on Saturday May 7 at 8pm.