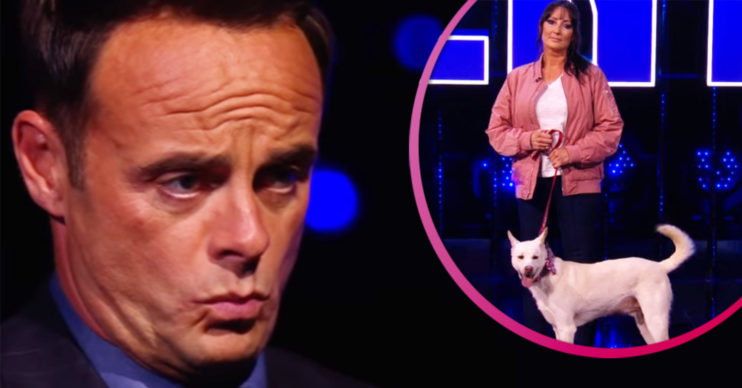 BGT: Ant McPartlin gets choked up over emotional dog performance

BGT host Ant McPartlin couldn’t hold back his emotions after a special Britain’s Got Talent performance.

The 44-year-old was left teary-eyed after contestants Amanda and her dog Miracle performed a heartwarming routine remembering how Miracle was rescued.

Miracle had previously been caged along with 1,000 other dogs and headed for the Thai dog meat trade when he was taken in by Amanda.

The sweet story won over the hearts of the judges in the auditions earlier this year.

Ant McPartlin got emotional at the side of the stage

In the performance, Ant – who was stood to the side of the stage – could be seen looking tearful by the end of the act.

The routine told the heartwrenching story of Miracle and Amanda meeting for the first time and featured a number of magic tricks.

Miracle was represented by a puppet, but at the end of the performance, the real dog appeared from behind a curtain and came darting towards his owner.

Since bringing Miracle back to the UK, Amanda explained that the pooch has built a close relationship with her son Kyle, who has cerebral palsy and autism.

Despite their performance, Amanda and Miracle didn’t win enough votes to make it through to the final.

What else has been happening on Britain’s Got Talent?

Britain’s Got Talent and ITV have still been feeling the aftermath after airing a dance performance by Diversity focusing on Black Lives Matter.

The performance focused on the story of George Floyd, and featured dancers taking the knee as well as other references.

Reports have claimed that Alesha Dixon threatened to walk if ITV apologised after receiving over 15,500 complaints from viewers. However, Alesha recently hit back via her Instagram at the ‘false, negative, inaccurate stories’.

Meanwhile, Ashley has recently hit back at the criticism.

Britain’s Got Talent continues on Saturday at 8pm on ITV.