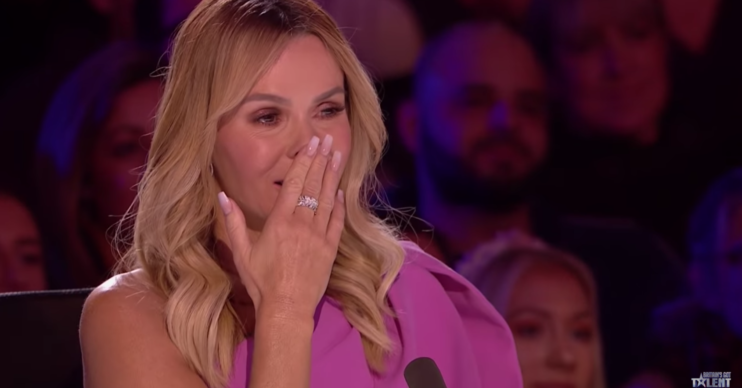 The youngsters sang about climate change

After blubbing through mother-daughter singing duo Honey and Sammy – who became her Golden Buzzer Act – she was set off again by a children’s choir.

SOS From The Kids had a message for all the adults in the world – stop messing with the planet!

The gaggle of children performed a powerful song about climate change.

Lyrics included: “This is an SOS from the kids, all the grown-ups take note of this. We are finding our voice, calling you out.

“You can’t leave the world in fire and drought, this is an SOS from the kids.”

SOS From The Kids was formed when brothers Sim and Noah Macaulay joined forces with their cousin Coen Baines.

They were inspired to record a song by David Attenborough’s show Climate Change – The Facts.

The TV legend even wrote to Sim and Noah to thank them!

The earnest performance on Britain’s Got Talent was too much for Amanda, who’s a mum to two young daughters.

She tearily commented: “When you hear this from children’s voices I think we’ve got no choice but to listen and join forces to basically save the planet.”

Alesha Dixon added: “This is heaven. I think you’ll inspire so many people to do their bit.”

And Simon Cowell concluded: “Kids rule the world right now. You are exactly what I was hoping we’d find this year.”

SOS for the Kids have also written another song, Stand As One.

They want to raise money to buy frontline workers personal protective equipment as they fight coronavirus.

“It’s a thank you to all those on the front lines fighting Coronavirus,” a message on the SOS From The Kids’ official Facebook account explains.

“Proceeds of this song will go to NHS Charities Together & Masks For NHS Heroes. This was written, recorded and filmed (via Zoom) during lockdown.

“[The song] is about saying thank you to them especially.

“Taking care of them by staying home and staying safe at home so that we don’t have to have any injuries and go over there because they don’t have much space.”

What did you think of SOS From The Kids? Leave us a comment on our Facebook page @EntertainmentDailyFix and let us know.