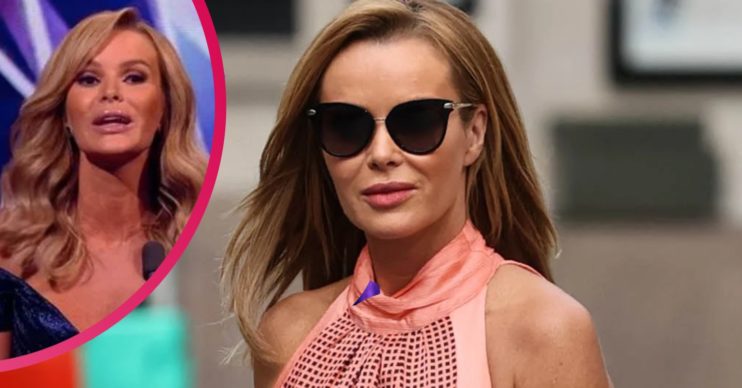 The 49-year-old star revealed that before she goes out on stage the so-called “[bleep] committee” give her a once over to make sure she won’t offend fans.

She joked that there’s an array of people that “stare at her chest” before she’s allowed to leave her dressing room.

“There’s now a whole body of people that knock on my door and come and stare at my chest before we go on air,” she told The Sun.

“There’s a [bleep] committee. There are so many brilliant people, they come down, knock on the door and there’s the lady who’s the producer who said, ‘Mandy, it looks great.'”

What do BGT viewers say about Amanda Holden’s outfits?

The TV star said she felt like viewers mistakenly thought the dress’s under-wiring was her nipple.

“People thought it was my nipple they could see but it was the underwire,” she said.

Amanda joked her “husband describes them as being like football studs”.

Read more: BGT: Viewers fuming as judges send the ‘wrong’ act through to the final

What does Amanda think about the Ofcom complaints?

This isn’t the first time Amanda has defended her outfit choice for the ITV talent show.

Speaking to OK! Magazine last year, Amanda said: “I love it that people are still talking about my tired old breasts and I’m nearly 50!

“I try not to think about age anymore when I’m dressing.

“My children don’t bat an eyelid at what I wear and love borrowing my clothes.”

Meanwhile, she added in an interview with The Sun: “My [bleep] seem to become the show’s biggest talking point every year.

“We’ve had plenty of complaints apparently, but none from home, let me tell you.”

She went on to reveal how she once wore a nipple cover underneath a dress.

Speaking about one particular dress, Amanda joked: “I was thinking that it’s a family show and people talk about my boobs every year, so I thought I would wear a nipple cover. I’d now happily put it on eBay.”