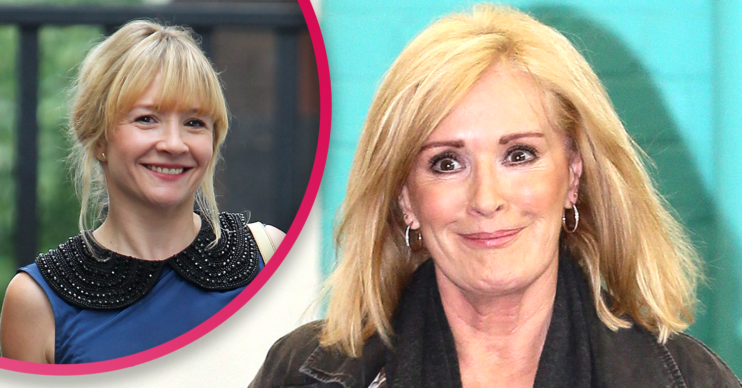 She's appeared in Corrie, too!

Posting to Instagram and Twitter, the Coronation Street favourite admitted she was going to “brag” about her “beautiful” daughter.

Rebecca turns 46 today, so if her famous mum can’t brag about her today, then when can she!

So what did Beverley Callard say about her daughter?

Fans were quick to comment on the picture, with many saying Rebecca looks just like her famous mum.

“A spitting image of you Bev, happy birthday!” said one fan.

“She has your lovely dark eyes!” said another.

“She is the image of her mama,” said a third.

“Gorgeous, just like you ❤️ Happy birthday,” said another.

“Beautiful and the spit of her mum,” another declared.

Another fan added: “The apple doesn’t fall far from the tree.”

So what does Rebecca do for a living?

Indeed, the apple doesn’t fall far from the tree.

Beverley and Rebecca have more than just looks alike – they also share the same job.

In fact, Rebecca has even appeared in Coronation Street.

Read more: Beverley Callard was ‘bullied’ into having a facelift

Cast your minds back to 2011 and you may remember Fiz Brown heading to prison.

Well, Rebecca’s character Ruth Walsh was locked up with her and played a bad girl jail bird who tormented Fiz during her time inside.

She’s performed in Shakespeare plays on stage, was nominated for a National TV Award for The Grand and even writes TV shows behind the scenes.

And, on the subject of pals, she grew up with Spice Girl Mel B!

How many kids does Beverley have?

Rebecca is Beverley’s eldest child, with her first husband Paul Atkinson, who she married when she was just 16.

In 1990 son Joshua – with third husband Steve Callard – was born.

Rebecca took his surname but Beverley split due to his infidelity.

Beverley is now married to fourth husband Jon McEwen after they tied the knot in 2010.

Head to our Facebook page @EntertainmentDailyFix and tell us if you can see the likeness between Beverley Callard and her daughter.