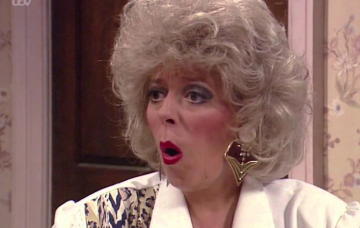 Coronation Street legend Julie Goodyear could make a sensational return to the cobbles after soap bosses made it clear the Rovers Return’s door is wide open for a comeback for the show’s most iconic landlady.

Julie, 76, played lover of leopard print and pub hostess Bet Lynch – later, Gilroy – for over 25 years before calling time on the character in the mid 1990s.

Two brief Corrie cameos in 2002 and 2003 did not lead to any further storylines for the beehived soap icon – but outgoing executive producer Kate Oates reckons it could be the right time for an encore performance.

“I bet Julie would be great on the show,” Kate told The Daily Star On Sunday.

“If the story fitted, then why not? It could happen…”

Hailing the character as a “modern day icon”, the Corrie chief also joked she shared Bet’s taste for flamboyant fashion.

It is believed plans to rehire Julie could be a first move by new show boss Iain Macleod to give Corrie’s older stars more air time.

Soap fans caught a rare glimpse of Julie on TV screens earlier this year as she turned up on The Big Quiz.

The star received a standing ovation from the studio audience as she appeared in Bet’s trademark fur coat for a skit with current Corrie performers Julia Goulding and Jack P Shepherd.

It was reported last year that heavy smoker Julie turned down an offer from ITV to take part in I’m a Celebrity… Get Me Out of Here! because she couldn’t face the 23-hour plane journey getting over there without lighting up.

In 2010 she took part in a chaotic Corrie-themed episode of Celebrity Come Dine With Me with Ken Morley before joining the Celebrity Big Brother line up in 2012.

Do you want to see Bet back in Corrie? Let us know what you think by leaving us a comment on our Facebook page @EntertainmentDailyFix!