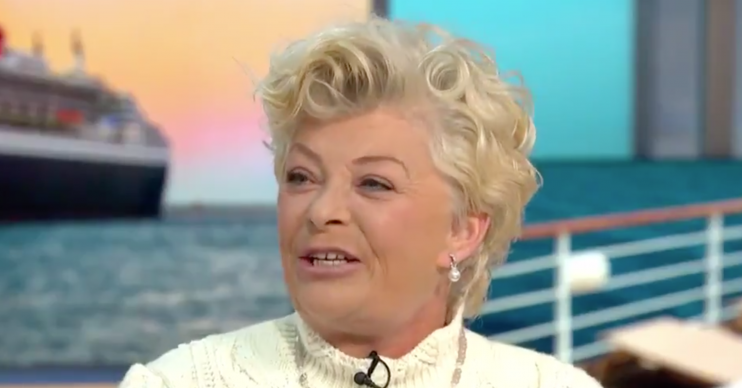 Comedy star Crissy Rock has admitted she was left terrified following coronavirus ‘near miss’ during a luxury cruise.

The Benidorm actress, 61, told Good Morning Britain viewers earlier today that she and her husband John were ‘quarantined’ on their ship during the unsettling experience aboard a Queen Mary 2 ocean liner.

Crissy and John were celebrating their honeymoon, two years after getting wed, with a trip to locations such as Thailand and Vietnam.

But the outbreak hit their travel plans and, according to Crissy, left their ship anchored at sea during attempts to contain the spread of the virus.

‘It was terrifying to think how close we were to where the virus was.’

Benidorm star @Crissy_Rock speaks to @kategarraway and @adilray about her experience of being trapped with her husband on a cruise ship that was banned from docking over coronavirus fears. pic.twitter.com/WL3TLQ2T5c

Just hours after returning from Australia last night, Crissy explained to breakfast TV hosts Kate Garraway and Adil Ray that the mood on the ship had been “very sombre”.

“It was terrifying to think how close we were to where the virus was,” she confessed.

It was terrifying to think how close we were to where the virus was.

However, despite her holiday nightmare, Crissy also hailed how passengers had been kept safe and treated well.

She continued: “The cruise company’s main priority was to keep everyone on the ship safe.

Benidorm star @Crissy_Rock sends her love to Julie Walters, who revealed yesterday that she was diagnosed with bowel cancer 18 months ago and has been given the all-clear after undergoing chemotherapy.

“We were all fed and watered and treated fabulous.”

Speaking about when it became clear all was on well, Crissy recalled: “We knew something was going wrong when it started to go: ‘This is a bit slow’.”

The couple were also due to take in Oman, Sri Lanka and Singapore before their last destination of Hong Kong.

However, cruise staff were keen to know whether they may have already been anywhere where they may have been exposed to the virus.

Crissy added: “We got told, more or less, they said: ‘Have you been in touch with any Chinese people?’ We said not yet.”

She continued: “We didn’t realise how quick the virus had spread and how pandemic it was. They couldn’t afford to risk it.

“No one on the ship had coronavirus but passengers have been banned from leaving the vessel with food and fuel supplies being provided by smaller boats.

“Anyone that coughed or sneezed or even passed wind, everyone was like: ‘Oooh.'”

But despite the atmosphere on board being “very sombre”, stand up Crissy maintained she will continue to look for the positives from her honeymoon’s unplanned developments.

“It’s not funny, but you’ve got to look at the funny side,” she insisted. “I’ve got loads of new material [in her show] about the cruise.”