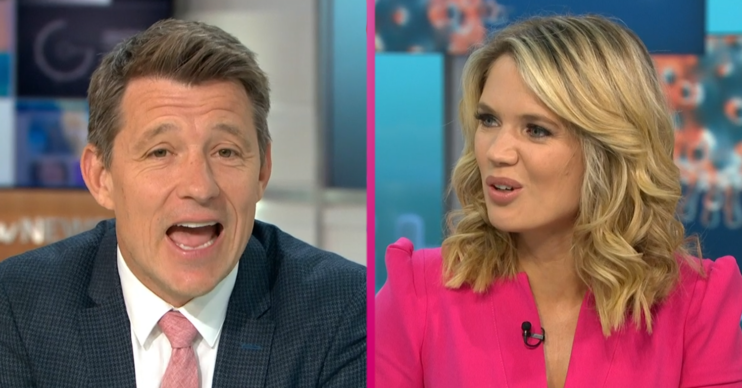 The GMB presenter momentarily forgot what show he was on

Ben Shephard had a hilarious slip-up on Good Morning Britain today (May 22).

The GMB host momentarily forgot what show he was presenting during a conversation with co-host Charlotte Hawkins.

It came as he explained that his son Sam’s birthday was on the horizon but he wasn’t sure how to celebrate the occasion in lockdown.

Ben Shephard slips up on GMB

Turning to the camera he. asked viewers for their help.

He said: “Send me some advice because we’re trying to come up with things we could door Sam.

“Maybe you’ve done some fun things for your kids while they’ve been going through lockdown to celebrate their birthdays.

“Do get in touch with us at GM.TV or you can tweet us of course.”

Charlotte then looked a little stunned at her co-host and was quick to pull him up on his. mistake.

“GM.TV?” she laughed. “Looking back? It’s been many years since then!”

Upon realising his gaffe, Ben laughed.

He quipped:  “Oh yeah. The good old days. There’s a little bit of nostalgia. It was GM.TV as well!

“Wow. How long have we been doing this show?”

After Charlotte reminded him that Good Morning Britain has been on air since 2014, Ben quipped: “It feels like longer.”

Turning to Dr Hilary Jones, who used to feature on GMTV alongside Ben, he added: “Do you remember those days, Hil?”

His comments then brought a huge smile to the doctor’s face as they reminisced.

What happened to GMTV?

Ben hosted the show alongside a string of other presenters including Fiona Phillips, Andrew Castle, Kate Garraway, Lorraine Kelly and Eamonn Holmes.

In 2010, Ben announced he was leaving the show and was replaced by Adrian Chiles.

GMTV was replaced later that year due to falling ratings with new show Daybreak – which was fronted by Adrian and Christine Bleakley.

The new format lasted for four years but was axed in 2014 and replaced with Good Morning Britain.

In the beginning, the ITV breakfast show was hosted by Ben, Charlotte, Susanna Reid and Sean Fletcher.

Piers Morgan was then brought in to front the show alongside Susanna in 2015.