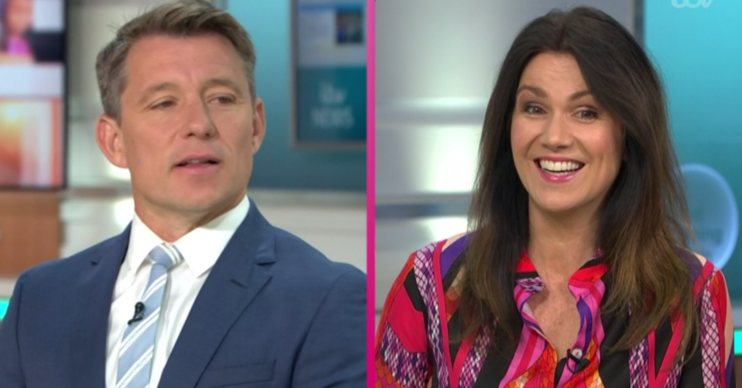 He was speaking to GMB correspondent Nick Dixon at the time, who was reporting on the reopening of Greggs live from Haywards Heath.

Perhaps not thinking before he spoke, Ben asked: “So Nick what time is the sausage coming out? What time is…”

The presenter then cut himself off after realising what he had said.

Laughter could then be heard from the crew who were standing off camera in the ITV studios.

“Stop it,” he awkwardly told them. “Where’s the cheer there?

“The sausage roll I was going to go on to say except I was interrupted by my own thoughts.

“Nick, we will be back to you a little later on to make sure all is up to scratch and your cameraman is happy with his sausage roll.”

Meanwhile, Susanna Reid was in hysterics as she joked: “I definitely need my hearing tested this morning!”

Nick could be seen grabbing his ear phone, possibly not thinking he heard Ben correctly.

If he did, the joke was possibly lost on the correspondent who didn’t crack a smile as he gave the studio a very straight forward answer.

Laughing back in the studio, Ben pointed out: “Nick seems delighted about that!”

But his bizarre sausage joke wasn’t lost on viewers at home who were quick to take to Twitter afterwards.

“What time is the sausage coming out?” wrote one.

Another then added with a series of laughing emojis: “@GMB @benshephard @susannareid100 ‘what time is the sausage coming out.”

Moments later, a third tweeted: “”what time is the sausage coming out?” Bake off level innuendo there Ben Shepard! #GMB.”

Shortly  after, a fourth commented: “Ben and his sausage roll #GMB.”