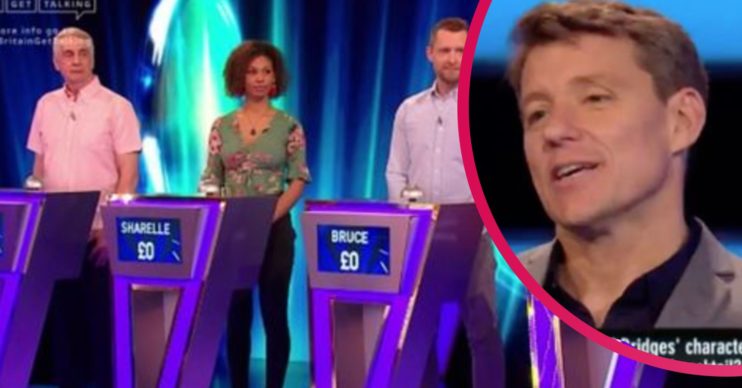 ITV star Ben Shephard got himself hot under the collar on Wednesday’s (October 7) episode of gameshow Tipping Point.

The presenter was busy trying to help out contestants Sharelle and Lindsey when a question popped up that led the two of them off on a rather unexpected tangent.

What made Ben Shephard laugh on Tipping Point?

The question he asked was: “In the 1998 film ‘The Big Lebowski’, Jeff Bridges’ character ‘The Dude’ famously drinks which vodka-based cocktail?”

Ben then asked Sharelle, who said she also had absolutely no idea.

“What we need is a vodka-based cocktail,” Ben replied.

“I’m just thinking is a Mojito vodka-based? But, no, I’m going to go Sex on the Beach,” said Sharelle, which sparked a cheeky discussion.

“I was thinking Screwdriver but I don’t know if I’ve got that from somewhere else?” said Lesley.

With both responses having an X-rated meaning, Ben turned to look down the camera and said: “Screwdriver or Sex on the Beach? Standard Tipping Point afternoon.”

Both the contestants then began giggling, and Lesley covered her mouth to try and hide her amusement.

Sadly, after all the cheeky responses, it turned out the answer was actually a White Russian.

Lingo – a quick-thinking game of words – is set to air on the channel this winter, Adil told Entertainment Daily.

The show will see three teams pitted against each other in a battle to find words.

With each round, the stakes become higher and the prize money escalates.

As a result, if a team can’t find a word, their opponents could swoop in and claim the word and the money.

Adil’s nerves ahead of gameshow debut

Adil will front the new show, which is being made by his Good Morning Britain co-star’s production company, Wildcard.

Speaking exclusively to ED!, Adil revealed he was “a little bit nervous” about the move into gameshows.

“Oh my God I’m a little bit nervous because it’s the first time I will have done something like this. But even so I’m really excited,” he added.

He also revealed the show will have a “simple format” and “no shiny floor” for now.

“It might become that one day,” he said, revealing he’ll be filming 30 episodes in 10 days next month.