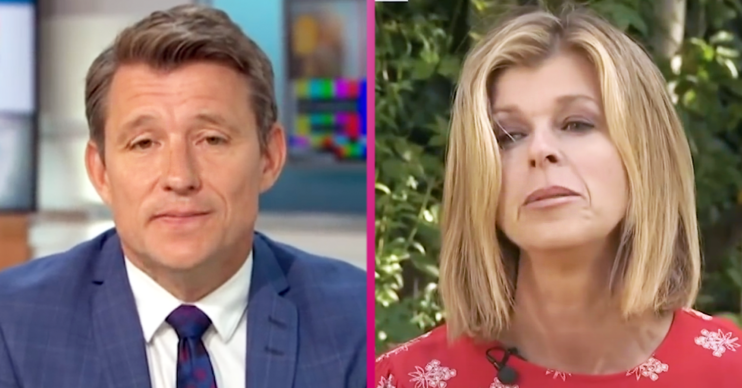 "It means so much"

Ben Shephard and Kate Garraway have been colleagues and close pals for a long time. And their genuine bond was clear to see on Good Morning Britain today (Friday, June 5).

Normally the pair joke about and squabble like siblings, but the sadness Ben felt seeing his friend in pain on the breakfast show earlier was all too palpable.

Read more: Kate Garraway reveals Derek’s words to her before the coma

Kate was interviewed on the show that she normally presents after an absence of almost three months. She wanted to give viewers an update on husband Derek Draper.

Derek has spent the past 10 weeks in intensive care battling coronavirus and GMB fans have been worried for the I’m A Celebrity star.

Mum-of-two Kate explained that Derek was now free of the killer virus. But it has has done so much damage to his body it is unclear whether he would recover.

“He’s now COVID-free, the fight of the virus has been won,” she said.

Kate then spoke of the final words she exchanged with her husband of 15 years before he was placed in an induced coma.

She said: “He couldn’t really speak to me because of the mask, but he was begging me, ‘I feel like I’m suffocating, please let them put me in a coma’, because there was a debate about that.

“But I said, ‘No we’ve got to wait,’ because if his lungs can handle it that’s better. Then on the Sunday morning they rang me up and said we’re going to be him in a coma, and he just said to me, ‘I love you, I have to leave you’, and I said, ‘It’s only for three or four days and you’re going to be fine, this is good.

I feel like I’m suffocating, please let them put me in a coma.

Kate also spoke of her concern for their children, Darcey, 14, and Billy, 10, and how she wanted to be okay for them. But, Kate added, she is clearly very sad and anxious.

Viewers noted how Ben struggled through the interview, clearly fighting back tears as he heard Kate recount her experience.

Despite what she and her family are going through, Kate said that she had a lot to be grateful for. She spoke movingly of looking for the positives.

This echoed her previous message of ,’Where there is life there is hope’.

There was an outpouring of love and support from viewers. They been concerned about the popular TV star since news about Derek first broke.

One summed up the feelings of thousands, saying: “Such an emotional and brave interview with Kate Garraway on GMB today whose husband is still battling COVID after 3 months. Thinking of all families out there in this situation.”

Such an emotional and brave interview with #KateGarraway on #GMB today whose husband is still battling COVID after 3 months. Thinking of all families out there in this situation xx #stayathome #staysafe

He wrote: “I’m not sure what the right words are so simply ‘thank you’ for all your messages of support and love to Kate, Derek and the kids. It means so much.”

I’m not sure what the right words are so simply thank you for all your messages of support and love to Kate Derek and the kids it means so much https://t.co/nPlpN30Khf