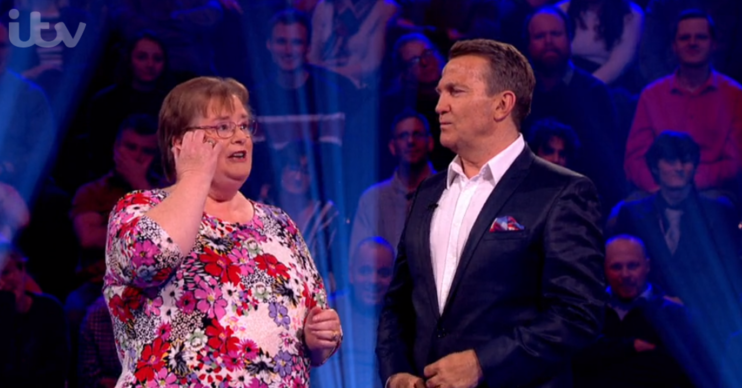 Fans of Beat The Chasers were absolutely heartbroken for a contestant named Val who came one second away from winning a whopping £10k.

As their chat got underway, Brad asked Val what she did for a living and she proclaimed loudly that she was retired – and it’s why she has time to do quizzes.

The presenter joked: “What were you, a town cryer!?”

Val’s personality didn’t go unnoticed by the chasers, as Paul Sinha was seen whispering to Mark Labbett when she came bounding onto the stage: “We’ve got a bubbly one!”

The banter continued back and forth during her cash builder round. After getting her first question right, The Beast was explaining the answer when she cut in and finished his sentence for him.

We were all fully behind you.

The Sinnerman quipped: “On the plus side it’s very quiet in Horsham tonight!”

“Not with my family!” Val laughed.

She got her second question wrong, and for her quick fire against the chasers, she took the three-chaser offer for £10k rather than playing for her own cashbuilder pot of £1000.

Unfortunately for Val, despite her 20-second advantage, chasers Mark Labbett, Anne Hegerty and Shaun Wallace beat her – with just one second remaining on their own clock!

The last question she got wrong was: What animal’s milk makes the cheese, brie?

Viewers at home were absolutely gutted for Val, who had explained she was trying to get money to put towards her daughter’s wedding.

One viewer said on Twitter, with a weeping emoji: “Oh Val #BeatTheChasers.”

Another tweeted, alongside a string of crying emojis: “Awww Val #BeatTheChasers.”

A third said in all caps: “CANNOT BREATHE! VAL WAS SO CLOSE.”

Read more: Beat The Chasers: Frustrated viewers slam show for being ‘too easy’

Someone else wrote: “Brilliant #Val on #BeatTheChasers, you totally deserved to go through though #gutted.”

A fifth said: “To Val who was just on #BeatTheChasers… we were all fully behind you in this household. Sooo close, so gutted for you.”

To Val who was just on #BeatTheChasers .. we were all fully behind you in this household. Sooo close, so gutted for you