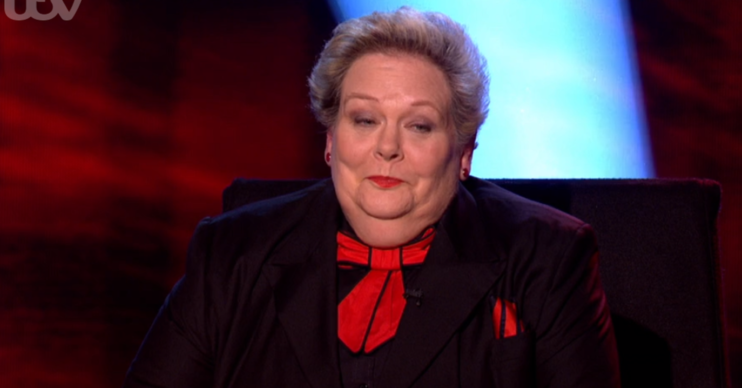 Last night’s (Tuesday, April 28) episode of The Chase spin-off saw The Governess once again team up with her fellow quizzers to take on brave members of the public.

At one point in the show, host Bradley Walsh welcomed Joel, a contestant from Bristol who enjoys playing American football.

After Joel took his turn at answering his first set of questions, he was then presented with the chasers’ offers.

When it was Anne’s turn to speak, she quipped: “I’ve been described as a wide receiver…”

The studio audience erupted into shocked laughter, while Joel covered his face and Bradley turned away in stitches.

When they settled, Anne set them off again by adding: “Having previously been a tight end.”

The comment stunned viewers on Twitter, with one writing alongside a laughing emoji: “I love @anne_hegerty #BeatTheChasers.”

I cannot find the words to say how I feel.

Someone else said, with a laughing GIF: “Anne’s been described as a wide receiver. I can’t #BeatTheChasers.”

“I’ve been previously known as a wide receiver”

“And a tight end”

"I've been described as a wide receiver"

Read more: Anne Hegerty responds to concerns about her appearance on Family Chase

Another shared a GIF of Maggie Smith’s character from Downton Abbey saying: “I cannot find the words to say how I feel.”

Someone else called Anne’s joke “hilarious”.

“Nearly choked on my wine with @anne_hegerty stating she’s been described as a ‘wide receiver’ having previously being a tight end,” said another, adding. “I’m gone.”

Catching up on #BeatTheChasers and nearly choked on my wine with @anne_hegerty stating she’s been described as a “wide receiver” having previously being a tight end. I’m gone. pic.twitter.com/kNOLFtfVOq

Beat The Chasers started on Monday (April 27) and airs every night this week at 9pm on ITV.

So far it’s gone down well with fans of The Chase, some of whom think the new format is even better than the original. Some, however, think the spin-off has too much talking and not enough quizzing.

Are you enjoying Beat The Chasers? Leave us a comment on our Facebook page @EntertainmentDailyFix and let us know.