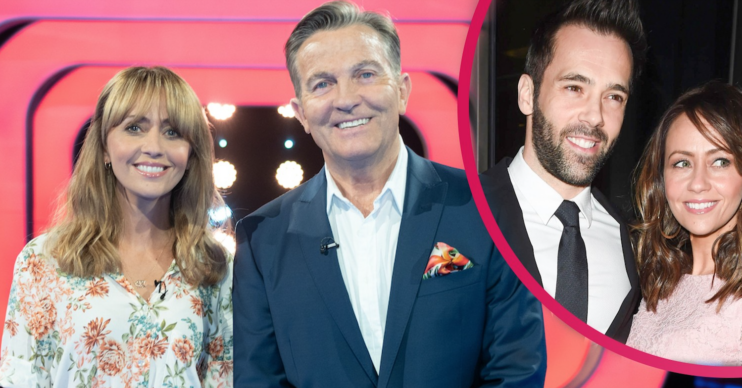 All ended well for the cute couple who were clearly meant to be!

But how did Samia become famous and how did she meet her husband?

How did Beat The Chasers star Samia Longchambon become famous?

At only eight years old, she appeared as an extra on Coronation Street.

Around this time Samia landed child roles in other series such as Cracker, Children’s Ward, Heartbeat and Doctors.

However, 10 years after she first appeared in Corrie, she beat out the likes of Suzanne Shaw and Kimberley Walsh to land the role of ‘maneater’ Maria Connor.

Who does Beat The Chasers star Samia Longchambon play in Corrie?

Still on the show some 20 years later, Maria has been involved in some huge storylines, been married three times and is reckoned to have had 16 lovers.

Samia told The Sun: “They’ve definitely missed a few off.

How did Samia meet husband Sylvain and has she been married before?

Samia married property developer Matt Smith in Cheshire in 2005 after a seven-month engagement.

Together, they had a daughter – Freya – but six years later the couple announced they had split.

And Matt was not happy.

He told The Sun: “They have to live with what they have done.

“She’s my wife, I love her and we’ve got a child together. If she wants to speak to me, she can. I’m just trying to get on with my life.”

Partnered with French skater Sylvain Longchambon on Dancing On Ice in 2013, the two hit it off and became close.

So much so that Samia split with Will and Sylvain dumped his own girlfriend, Hollyoaks star Jennifer Metcalfe reportedly on Christmas Day.

A message from the spirit world

When Samia and Sylvain sealed the deal in 2016, she said to OK! magazine: “The day was better than we could ever have imagined.

“It was absolutely magical to spend it with friends and family who we love. To have them all in one place celebrating with us was amazing.”

However, Samia also revealed that a medium predicted that she and Sylvain would get together.

In the same interview, she said: “I first visited [the medium] about a year before I did Dancing On Ice, and she asked me: ‘Who is Leon?’ I said I didn’t know anybody called Leon.

“Then she said my dad was saying the word Lyon, and it could mean the place in France.’”

Sylvain is from the city of Lyon in France.

The couple now has a son, Yves, together.

Samia has also revealed she suffers from anxiety and has done so since she was a child.

In fact, she said that the anxiety was misdiagnosed and that her breathing difficulties were inititally thought to be down to asthma.

Samia said on a recent episode of Loose Women: “I’ve had anxiety since I was a child and when I was a child, my mum took me to the doctors and the doctor first diagnosed asthma because I couldn’t get a deep breath.”

She went on to reveal that her anxiety has been “quite bad” in the last three years or so.

But when it comes to lockdown, Samia said: “That was really anxiety-inducing listening to the news every day but I think being at home, I’m such a home bird so I’m way happier with a takeout on the couch.”

Samia also revealed that a new chapter of her life has recently begun – she’s now a qualified reflexologist.

Furthermore, she said in an interview with The Sun that she’s even set up a “backstage spa” on the Corrie set.

Read more: Maria in Coronation Street: how many times has she been married? How many children does she have?

“I’ve spoken to my bosses at work and they’ve said I can do it in my dressing room, so I’ll be offering treatments soon.

“I’ve got my reflexology chair, my foot spa and all my get up, so I’m ready to go.

“I just need to get my bum into gear and get started. It’ll save me from sitting around gossiping and eating biscuits between scenes!”