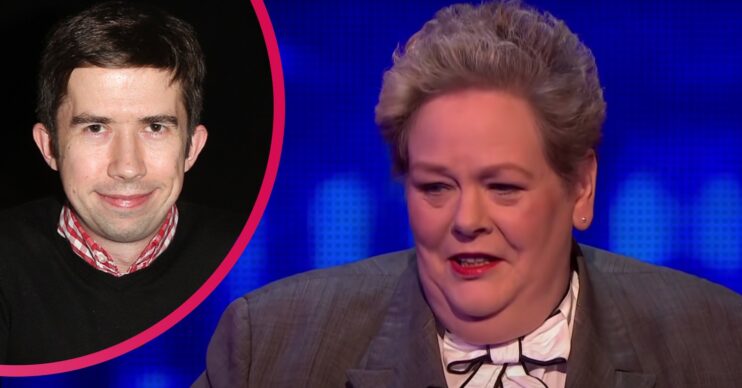 The show returns next week

Beat the Chasers’ return date has been announced, with the show confirmed to be returning on May 16.

Anne Hegerty‘s replacement, Issa Schultz, can also be seen in the post announcing the new series.

Finally I’m not the biggest nerd in a picture! #BeatTheChasers is back next week pic.twitter.com/HqXmTsizPZ

Beat the Chasers star Darragh Ennis, aka The Menace, revealed an exciting update about the show on Twitter today (Monday, May 9).

The 41-year-old Chaser revealed to his 26.8k followers that the new series of Beat the Chasers will be airing next week.

Darragh uploaded a picture of himself and his co-stars for his followers to see.

The picture is notable for not featuring Anne and instead has Australian Chaser Issa Schultz in her place.

“Finally I’m not the biggest nerd in a picture! #BeatTheChasers is back next week,” he tweeted.

Plenty of Darragh’s followers took to the replies to react to the news about Beat the Chaser’s return.

“Yeayy some proper entertainment on its way,” one of his followers tweeted.

“Can’t wait, love this, Beat the Chasers,” another said.

Other followers were wondering where Anne had gotten to.

“Where is Anne?” one asked. Others knew the deal and decided to have a bit of fun.

“I’ve heard of some mad COVID aftereffects but Jesus Anne wtf?” another joked.

The reason that Anne won’t be in the new series of Beat the Chasers is that she had Covid at the time of filming.

This meant that she was forced to pull out of filming.

Back in March, Anne informed her 161.7k followers that she had Covid.

“Unfortunately I’ve contracted COVID-19 so won’t be filming this series of #BeatTheChasers,” she said.

“The fantastic @Issa25 will be stepping in for me and I’m looking forward to watching the series when it’s on air later this year,” she added.

Her replacement, Issa Schultz, is a Chaser on the Australian version of the show.

The 38-year-old is nicknamed ‘The Supernerd’.

Beat the Chasers returns on Monday, May 16 at 9pm on ITV and ITV Hub.