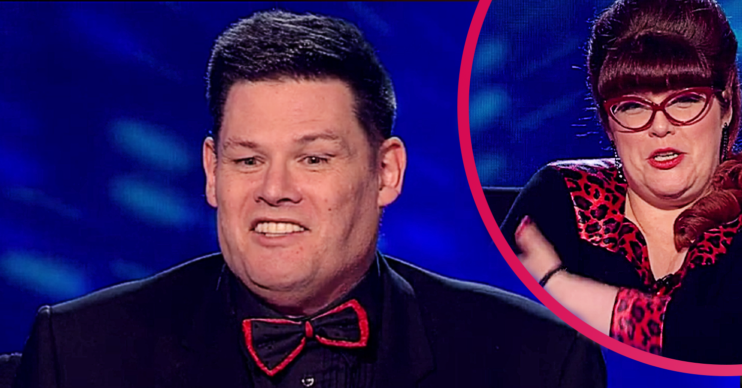 Beat The Chasers: Mark Labbett says he ‘punched’ Jenny Ryan to get her back for Paul Sinha incident

Mark said it was 'karma'

Mark, 55, took to social media after he was seen jabbing Jenny Ryan in the arm on the quiz show immediately after former Olympic-winning athlete Christine Ohuruogu beat the chasers to win £30k.

And he said he was getting her back after an incident earlier in the year.

What happened on Beat The Chasers with Mark Labbett?

The five Chasers – including, for the first time, Darragh Ennis – took on five celebs in the show’s first-ever star-studded special.

However, it was during Christine Ohuruogu’s chase that tensions boiled over.

Taking on four Chasers to win £30k, during one question Darragh buzzed in but Jenny answered.

The answer was deemed void, and Christine went on to win the cash for her charity.

However, Mark was not happy – mock punching Jenny and saying: “Before we go any further, I’ve got something to do… WRONG PERSON ANSWER! And wrong person answers kill you!”

#BeatTheChasers for those who wondered why I punched @jenlion on the arm, it was karma for her punching @paulsinha in same situation last series 🙂

What did Mark say about it?

Mark soon took to Twitter to explain his actions.

He wrote: “#BeatTheChasers for those who wondered why I punched @jenlion on the arm, it was karma for punching @paulsinha in the same situation last series.”

In that second series – aired earlier in January – Jenny hit Paul after got a question wrong.

Paul joked on Twitter after the incident: “Just returned from shoulder surgery.

Another said: “@jenlion hope your arm’s OK after Mark gave you that punch on #beatthechasers tonight, after that wrong person answer.

“Can’t believe he did that to you.”