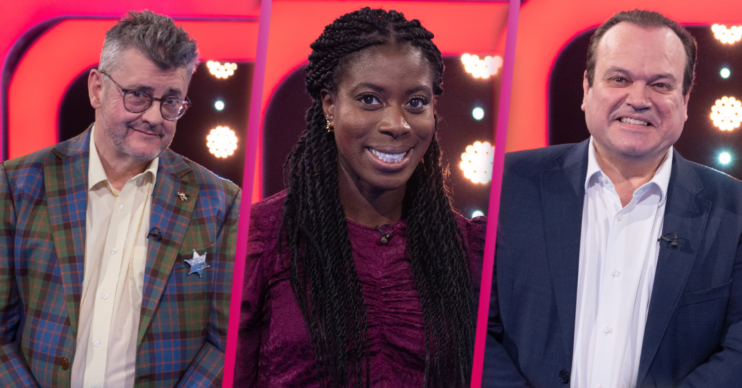 Beat The Chasers: Celebrities in the new special – all you need to know about them

It's a diverse bunch of celebs!

The Chase spin-off welcomes in five celebs into the arena.

But who are they and what are they famous for?

Who is on Beat The Chasers?

Fifty-nine-year-old comedian Joe started his career as an entertainer at a holiday camp.

His big break came when he appeared on the ITV talent show, New Faces, in 1987.

With appearances on the stage following, he got his own show on the same channel in 1996 – The Joe Pasquale Shows – as well as two Audience With… shows.

In 2004, Joe appeared on the fourth series of I’m A Celebrity.

He beat out Paul Burrell and Fran Cosgrave to win the series.

He is currently divorced and has a son from his marriage to second wife, Debbie.

Katherine, 37, grew up in Canada but moved to the UK in 2007 after her then partner wanted to explore London.

Previously, she had visited Nottingham in the role as a corporate trainer for the infamous Hooters bar chain.

In the 2010s, she became a popular panellist on shows like 8 Out Of 10 Cats, Never Mind The Buzzcocks and Mock The Week.

She also appeared on Let’s Dance For Comic Relief in 2013 and recently got her first stand-up special on Netflix.

Katherine has a daughter from a previous relationship and entered into a civil partnership with Bobby Kootstra in 2019.

Friends from childhood, the two reconnected when she went back to Canada to film an episode of Who Do You Think You Are? and explore her family roots.

As a relative unknown, 55-year-old Shaun hit the big time when he landed a role in EastEnders in 1994.

Playing the hapless Barry Evans for almost a decade, he became a household name.

Barry was killed off in 2003 after being pushed off a cliff edge by his wife, Janine Butcher.

Shaun was reportedly axed from the show after bosses would not let him perform in a pantomime.

As well as acting, Shaun is an accomplished singer and has appeared on stage in musicals.

He’s married to second wife Adele Seager and they have one child together. He has two children from his first marriage.

Aside from Blue Peter, Radzi has also appeared on Sky One’s Gladiators and is also Sky Sports’ commentator for NBA basketball matches.

Viewers will recognise also him after he appeared in the 2020 series of Dancing On Ice.

Born to Nigerian parents, Christine Ohuruogo hit the big time when she won Olympic gold in the 400m in Beijing, China.

Upon doing so, she became the first British woman to win a 400m gold in UK history.

She went on to win silver four years later in the London Olympics.

However, that’s not the end of Christine’s stellar medal haul: she won gold at the World Championships in Osaka (2007) and Moscow (2013).

Since retiring, Christine has penned children’s books and has gained a law degree.

Beat the Chasers The Chase