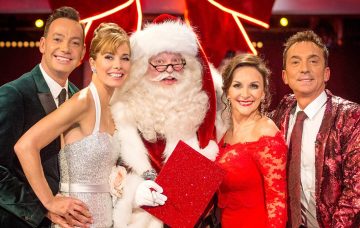 Collapsing on the sofa in front of the telly after Christmas dinner is as much a festive tradition as turkey and sprouts themselves in the UK.

But you might want to get out the Scrabble instead this year as the TV schedule is a little lacklustre.

Some viewers have branded the BBC’s offering boring, after the line-up was shared on Twitter.

The likely suspects are all in there for Christmas Day: Strictly Come Dancing, EastEnders, Call The Midwife and Mrs Brown’s Boys Christmas specials.

The festive special will be time hopping to New Year’s Day; it’s the first time it won’t appear on Christmas Day since its reboot 13 years ago!

Read more: The best films on TV this Christmas

BBC1 doing their bit to encourage a resurgence in family board games there. #NotASingleprogrammeOfInterest

I love the BBC, but this is terrible. pic.twitter.com/MrgpbayK3Q

Another reason to abolish the television licence! I’d sooner watch the fridge defrost than indulge on any of that bilge !

God, just how poor is this line up. Very is the answer to that.

So this is what we pay a licence fee for? Bloody hell

Many viewers said they would be switching over to Netflix this Christmas instead.

The streaming service will be showing a load of great films including The Holiday, A Christmas Prince: The Royal Wedding, Christmas Chronicles and the Princess Switch.

The schedule for New Year’s Day isn’t any better…

The BBC has unveiled a range of box sets of favourite shows that will be available on iPlayer across the festive season, though, so perhaps we can forgive them a little!

Will you be giving BBC One a miss on Christmas Day? Leave us a comment on our Facebook page @EntertainmentDailyFix and let us know what you think!