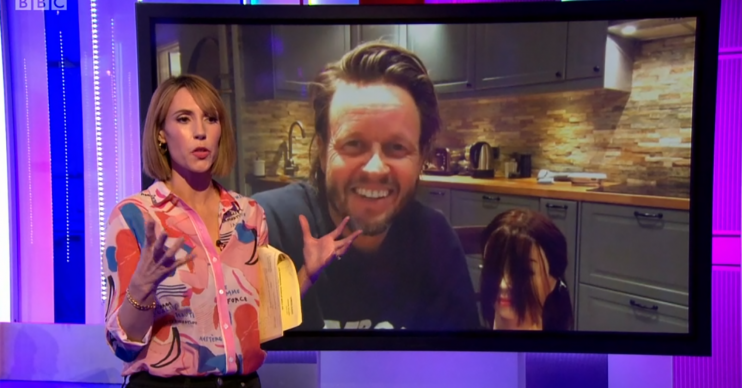 BBC has received complaints after a hairstylist told The One Show viewers to dye their own hair at home.

Michael Douglas appeared on the programme via video call to give tips on how people can look after their hair during the coronavirus lockdown.

However, the BBC confirmed it received 287 complaints in total over Michael’s advice.

What did Michael say on The One Show?

He told host Alex Jones that buying hair dye from a shop is “exactly the same stuff that gets used in salons”.

Michael also suggested viewers try semi-permanent dye if they weren’t used to dying their own hair.

He gave more tips on how to shave and cut your own hair at home too.

However, viewers weren’t impressed by his advice and complained to the BBC.

BBC has responded with a statement on its website.

The statement reads: “The One Show had been contacted by a number of viewers asking if they could go to the hairdressers given the current advice about social distancing.

“We therefore decided to include this item which looked at whether we should be cutting hair ourselves.

“We gave viewers some simple advice to help them feel confident about managing their hair until they are able to get their hairdresser to do the job properly.

Read more: Matt Baker tipped to do I’m A Celebrity this year after quitting The One Show

“We believe viewers would be aware of the need to carefully check the instructions for any product they buy.”

Michael also apologised in a video posted to his Instagram.

He explained: “I seem to have upset a lot of people. That was not my intention at all.

“I was briefed [on the show] to make suggestions people could actually see through.

“I did make a controversial statement saying the box dyes were the same as the professional hair colour.

I really didn’t mean to upset so many of you. My intention was just to help viewers and consumers. With specific queries they had posed.

“It wasn’t an incorrect statement.

“But I probably should have clarified that what the hairdresser offers is the skill and expertise, application, colour choice, the ability to blend colours together.

“I was making a point that it is safe to colour your own hair…perhaps in retrospect I would have phrased things differently.”

Did you complain about the segment? Leave us a comment on our Facebook page @EntertainmentDailyFix and let us know.

Alex Jones BBC One Coronavirus The One Show