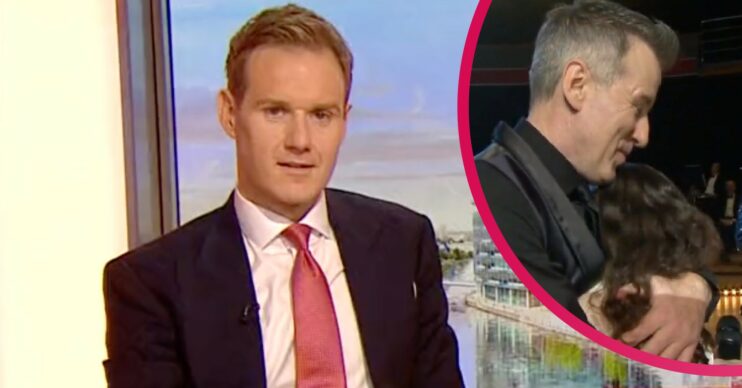 The pair joined forces on the BBC One programme for an emotional segment on Amelia Eldred.

The 11-year-old girl had her leg amputated in 2017 after being diagnosed with bone cancer.

After recently being fitted with a prosthetic blade, Amelia is now able to walk again.

And it also hasn’t stopped her from dancing.

During the show today, viewers watched on as Anton surprised Amelia.

The segment showed Amelia and her mum being invited to join Anton and Dan on stage at a show.

The professional dancer gave the young girl a huge hug as they met for the first time.

Michelle went on to explain the significance of Strictly during her daughter’s cancer battle.

11 year old Amelia lost her leg to cancer, but after recently being fitted with a prosthetic blade, she’s now able to get back to her first love – dancing 💃

This was the moment she got a very special surprise from her favourite #Strictly star Anton Du Beke on #BBCBreakfast ⤵️ pic.twitter.com/4675uuuaj6

She said: “Saturdays were always Strictly – no matter where we was. We would come home from hospital and however ill she felt, we had to have Strictly on.

“It’s just inspired her to keep going and keep challenging herself.”

Dan then revealed that it had been four years since Amelia’s first operation.

We had to have Strictly on

The 11-year-old added: “To think I had cancer was horrible and it was very hard.

“But when I knew I was going to walk again and to dance again, it just helped me express myself. It was something I really enjoyed.”

How did BBC viewers respond?

On Twitter, one said: “That’s a 6pm story for news, tears on Monday morning not good #WonderfulAmelia.”

A third wrote: “I’m not a fan of Strictly, but what a lovely story and nice to see a couple of genuinely decent celebrities in @mrdanwalker and @TheAntonDuBeke. Keep Dancing Amilia!”

In addition, a fourth shared: “Very emotional moment. Glad she got to meet Anton and to dance with him!!!”

A fifth posted: “This was such a moving and beautiful piece.”

Furthermore, Dan tweeted: “What a privilege to film this with Amelia & @TheAntonDuBeke.”