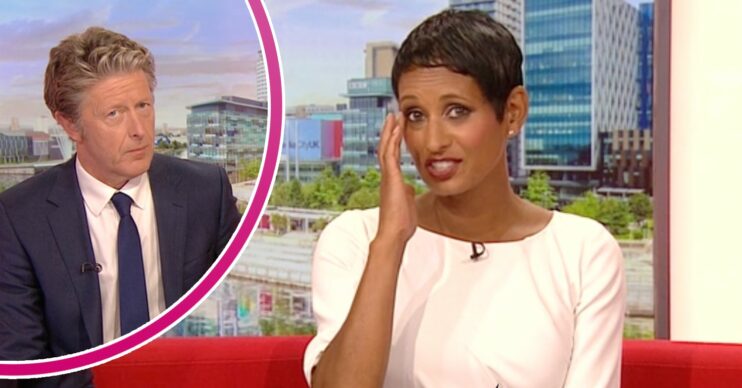 Viewers weren’t happy with how Naga acted during a report about ice cream on this morning’s show.

However, at the end of the segment, Naga shockingly revealed that she doesn’t in fact like ice cream.

“Bet you wish you were here now,” Hannah said to Naga. “I don’t like ice cream, Hannah,” Naga confessed.

“You don’t like ice cream?!” Hannah asked. “But you just said pistachio [flavour was her favourite].”

“If I had to eat an ice cream for the rest of my life it would be pistachio, but I don’t like cold food,” Naga said.

Hannah then asked Naga if she liked brownies, but Naga isn’t overly enthusiastic about them either.

“But you know, we’ll get to know each other, Hannah,” she said as an awkward silence fell.

“Hannah, it’s been great talking to you, I’m glad you’re enjoying the ice cream. It’s certainly needed in this weather,” she continued.

Turning to Charlie, Naga said: “Hannah’s been sent… Imagine that, business correspondent, what’s your job, to get sent off to an ice cream factory and you actually like an ice cream parlour.”

However, Charlie was less than impressed with Naga’s reaction. “I think you rather brought the tone down there,” he said to her.

“Oh be quiet! Come on. I apologise,” Naga protested.

Unsmiling, Charlie then said: “Hannah is working hard doing the story and then…”

Charlie wasn’t the only one who wasn’t impressed with Naga’s behaviour during Hannah’s report on today’s show.

“Naga Munchetty was very rude to the young journalist in the ice cream factory, Charlie Stayt pulled her up on it,” one viewer tweeted.

“Naga?! If can’t say something nice, say nothing at all! Charlie was absolutely right to pull up on your comments after the Ice Factory segment!” another said.

A third wrote: “Naga behave in a rude and unprofessional manner. Charlie calls her on it.”

However, others took it light heartedly as one tweeted: “Loved the silence when Naga said she doesn’t like ice cream,” followed by a laughing face emoji.

Another said: “Oh do get a sense of humour!”

BBC Breakfast airs daily from 6am on BBC One and BBC iPlayer.