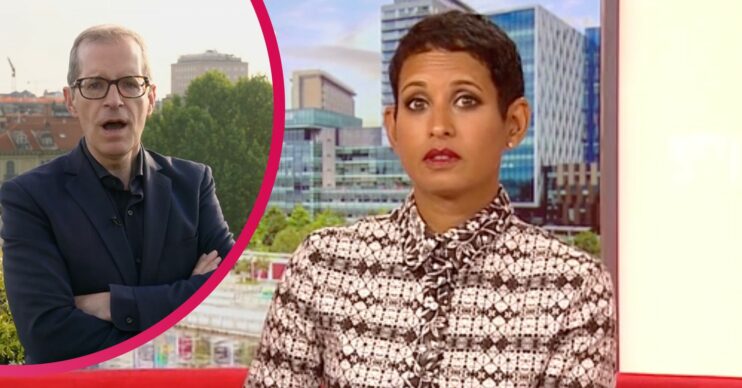 On BBC Breakfast today, Naga Munchetty was accused of using an “outrageous slur” during an interview with a correspondent.

It came during Naga’s chat with Eurovision correspondent David Sillito this morning (Friday, May 13) .

The final of the contest is taking place in Turin tomorrow night (Saturday, May 14).

Both Charlie and Naga agreed that the UK’s entrant, Sam Ryder, will likely do well tomorrow.

However, they were also in agreement that he won’t win the tournament.

Charlie also joked that he wasn’t going to read the autocue about the “growing optimism” of the UK winning Eurovision 2022.

Charlie continued, saying: “What it says it might finally be the UK’s year, but we all know that is not going to happen because Ukraine has tipped everything on its head and changed things right?”

Naga then added: “Sam Ryder is the UK’s offering and he is right up there amongst the favourites for tomorrow’s final. Now, here is us predicting, what do we know?”

They then introduced Eurovision correspondent David Sillito, who appeared via video link from Turin.

“That was our speculation about how the voting is going to go, and I would not say it’s a fair process always, would you?” Naga asked David.

David was quick to defend the contest, saying: “You do not know what is going to go on and what drama we have had at the semi-finals.”

He then went on to detail what happened in the semi-finals.

“Poor Ireland, poor, poor Ireland is out. There was such hope they would get through to the final,” he said.

“You have got to remember Ireland is Eurovision royalty having won, I think, seven times.”

He then spoke about his hopes for the UK, saying he believes they’ll finish in the top 20 this year.

“That’s as far as I am going,” he said. He then went on to say that there is a buzz around Sam Ryder’s song, Space Man, in Turin.

Ukraine are the favourites to win the contest. Surprisingly, despite their poor history in the competition, the UK is the second favourite.