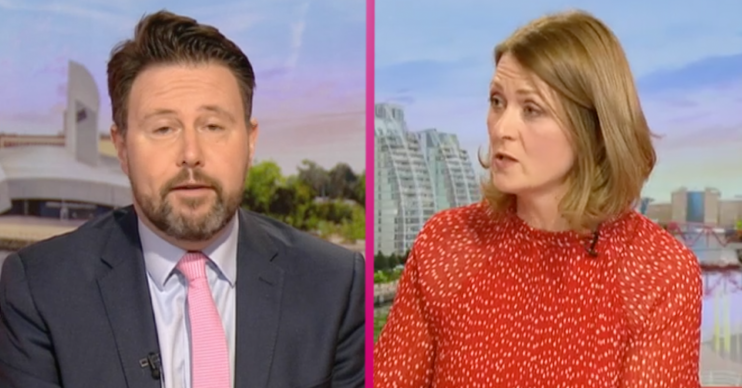 However, the pair were absent from our screens today.

How did viewers react to the new BBC Breakfast presenters?

Viewers seemed to love seeing Rachel and Jon on their screens.

Commenting on a post Rachel shared on Twitter, one fan said: “Glad you are both on this morning.”

Another added: “Great to see you on BBC Breakfast this morning.”

A third said: “Perfect team to kick off Saturday morning.”

What happened on BBC Breakfast this week?

Earlier this week, Naga and Charlie caused controversy after an interview with Housing Secretary Robert Jenrick.

At the end of the interview, Charlie made a joke about the size of Jenrick’s Union Jack flag.

Where are @TVNaga01 and Charlie Stayt today? Are they on the #bbcbreakfast naughty step?

Naga laughed and also noted that he had a framed picture of The Queen on the wall.

Read more: Naga Munchetty apologises after ‘ticking off from bosses’

Viewers were quick to complain, and a group of MPs wrote to the head of the BBC demanding the pair apologised.

Naga did apologise for an “offence” caused after liking a number of tweets about the incident.

How did viewers react to Naga Munchetty and Charlie Stayt’s absence?

The presenters’ absence from their regular BBC Breakfast slot today drew the inevitable jokes from viewers on Twitter.

One even quipped that they were missing because they were on the “naughty step”.

They said: “Where are @TVNaga01 and Charlie Stayt today? Are they on the #bbcbreakfast naughty step?”

Another joked: “Charlie and Naga are undergoing re-education sessions at Tory HQ.”

A third added: “I do enjoy #bbcbreakfast when Charlie and Naga have a day off.”