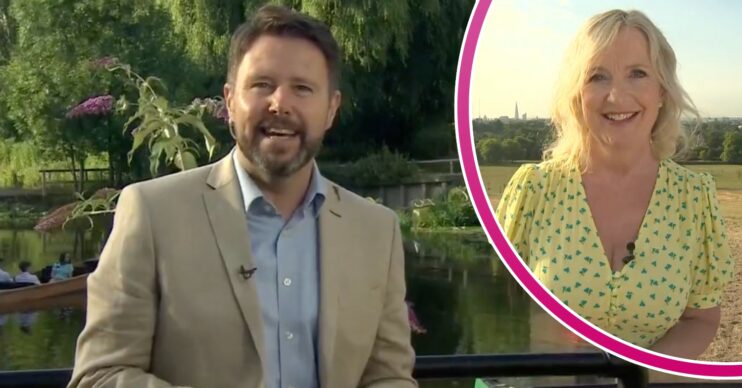 In case you hadn't heard, it'll be hot today…

BBC Breakfast was slammed by viewers today (Monday, July 18) for its “hysterical” coverage of the heatwave.

The heatwave was top of Breakfast‘s news agenda today, but viewers were not happy.

Temperatures are set to hit 40˚C in some areas of the country – making it a big talking point on today’s show.

During the show, weather presenter Carol Kirkwood issued viewers with advice on how to handle the heat today and tomorrow (Tuesday, July 19).

Elsewhere, Jon Kay kept viewers up to date on the red extreme heat warning that is in place across much of England.

However, some viewers thought that Breakfast was overreacting and “sensationalising” the hot weather.

Plenty of viewers took to Twitter to slam the programme’s coverage of the heatwave today.

“#BBCBreakfast surely there’s more news than the hot weather! Okay, we get the point, be sensible, stay hydrated and do not go out unless you have to stop sensationalising it and just report, and bring us other news.

“There are other important issues we want to hear about too,” one viewer tweeted.

“The whole tone is hysterical. Appalling coverage,” another wrote.

“I’ve never known anyone like the English to go about the weather so much,” a third said.

Other viewers thought Breakfast’s coverage was important though.

“Not overreacting at all. For the UK, 41 degrees is a good 10 degrees higher than the heatwave of 1976. 238 people have already died in Portugal because of the heat.

“Asthma and COPD suffers are already struggling in the UK,” they said.

It wasn’t just coverage of the heatwave that grabbed viewers’ attention today.

During the show, Jon had a moment to forget when a bird pooed on him!

The embarrassing moment happened while Jon was out in Cambridge reporting on the heatwave.

Speaking to Carole, he said: “Carol, have you got any tips for removing bird poo from linen jackets? Because I’ve just been splatted by a pigeon.”

“Try one of these wet wipe things – it might spread it a wee bit, but if you use a few…,” she suggested.

“It could get messy, couldn’t it? I’m slightly anxious about doing this. I’ve also got another jacket – maybe we’ll go for that option for now and hit the dry cleaners a bit later!” Jon said.

BBC Breakfast airs daily from 6am on BBC One and BBC iPlayer.