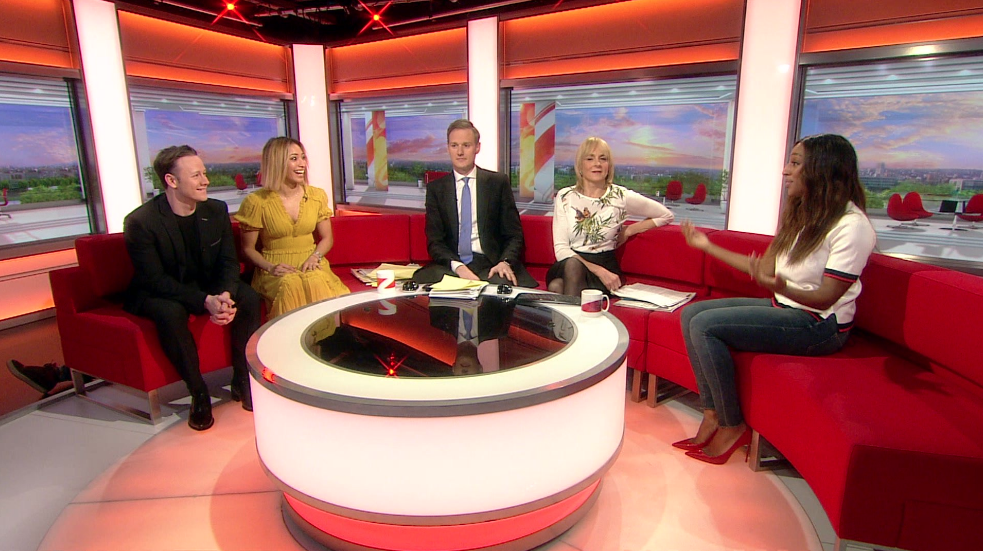 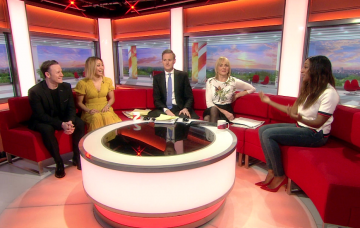 Dan Walker drew attention to somebody who shouldn't have been seen by the cameras...

Guests Alexandra Burke, and Kevin and Karen Clifton had a fit of giggles as a stranded BBC floor manager tried to hide from cameras by ducking behind a sofa after being caught unawares while on set.

Despite the young woman doing her best to avoid being seen as she laid down still, viewers could clearly see her trainers poking out from behind where the Cliftons were seated when cameras cut to a wide shot.

Stitching up his colleague, Dan leaned over the back of the couch and asked: “Are you alright there, Trace, you need anything?”

Explaining why the guests had looked so amused, he teased: “I know we shouldn’t do this, but can we have a bit of fun? Because this is a window into the world of television, because you were rushed on while we were speaking.”

Despite co-host Louise Minchin warning against highlighting the gaffe in case it embarrassed the member of studio crew, Dan pressed on: “We’ve got our floor manager, Tracey, hiding down here.”

Anyone want to play a game of spot Tracey’s feet? Our floor manager Tracey had to dive behind the sofa to avoid being on TV… pic.twitter.com/SMPN6nKtDu

According to reports, a scheduling error meant Tracey made her inadvertent appearance after Strictly stars Kevin and Karen were ushered before the cameras earlier than expected.

This was very funny, keep up the good work, enjoyable morning watch!

Dan and Karen also continued the banter on social media after the show ended.

The wonderful Tracey giving a whole new meaning to the job of ‘Floor Manager’ live on @BBCBreakfast this morning 🤣 pic.twitter.com/PLy5d9p0An

When the chuckling had died down, married stars Karen and Kevin talked about their upcoming tour and how their recent separation had affected their dancing partnership.

Kevin said the couple wanted to be up front and honest about their relationship.

“Privately our situation has changed,” he said.

“But professionally we’re still together and stronger than ever, really.

“Dancing is the glue that keeps us together. It is how we met. But we’re still really excited about going on tour.”

Karen was also upbeat, adding: “We’re still best friends and respect one another.”

BBC Breakfast is on BBC One, weekdays from 6am.