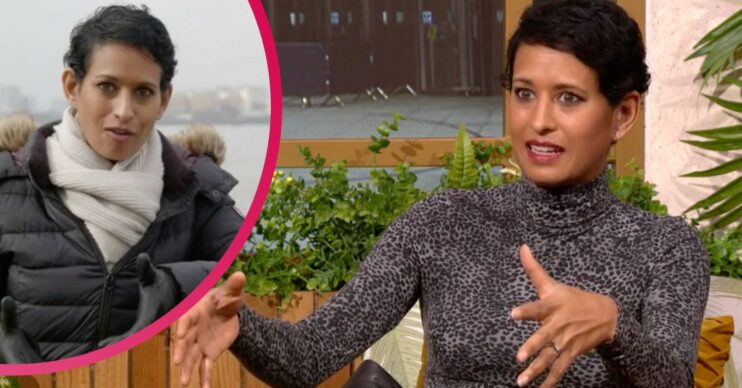 Told to 'turn off the hate'

Naga Munchetty has slapped down a troll moaning about her on BBC Breakfast when she wasn’t even part of the show.

Social media users ridiculed the hapless tweeter after they claimed Naga was “childish”. The troll claimed their criticism concerned an interview conducted with Grant Shapps.

But it was the troll who was shown up after Naga courteously informed them she hadn’t been at work.

The troll had apparently confused Naga with Victoria Derbyshire, who interviewed the Transport Minister instead.

What was Naga Munchetty accused of?

The Twitter troll claimed just before 8am this morning (Friday March 25) that they’d turned BBC Breakfast off.

That was apparently because they didn’t appreciate the way they thought Grant Shapps was being interviewed.

The troll suggested Naga was being “childish” in her “normal” manner.

But the badly-typed post also suggested Naga was ‘blaming’ the MP in a discussion about P&O Ferries job losses.

What did Naga say?

Naga picked up on the tweet – and just under an hour later quote-tweeted it to her near 270,000 followers.

She destroyed the troll’s mistaken or bad faith claims by replying: “I’m not at work today.

“Maybe you should turn off your default setting of hate instead?”

Naga then signed off with a kiss and: “Have a lovely day.”

‘Can you explain how a company can break the law, the boss openly admits it, and yet, they’re still operating?’

On #BBCBreakfast Transport Secretary Grant Shapps MP is asked why the government can’t revoke the licence of P&O Ferries.https://t.co/MgMWhDDdSh pic.twitter.com/xWzv7wtC66

Some Twitter users dismissed the troll as a “mug” as they repeatedly informed them Naga wasn’t on the box today.

Others suggested an apology was in order – but the troll has not responded or made any further tweets.

But many other Twitter users put forward the troll visit an optician, too.

“Someone needs to go to their optician. Just a hint,” tweeted one respondent.

Another wrote: “Should’ve gone to Specsavers! Naga is not on telly this morning.”

“It appears many of us feel you should take a ride to Specsavers!” a third summed up.

BBC Breakfast airs on BBC One every day from 6am. Naga isn’t necessarily on every show, though.