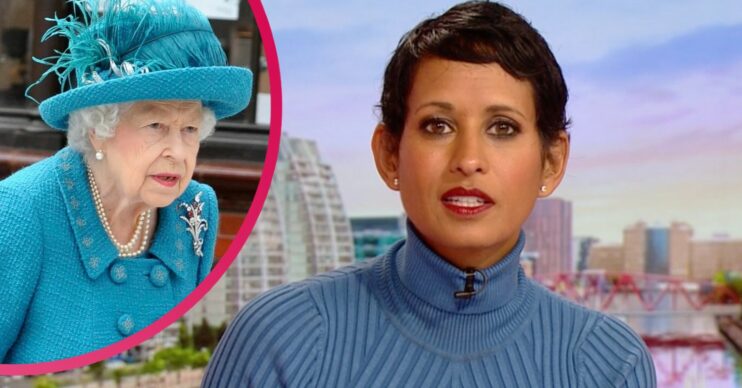 Naga spoke to a royal editor on the show today

BBC Breakfast star Naga Munchetty was corrected by a royal expert after making a mistake about the Queen on air.

Roya Nikkhah joined the presenter on the show earlier today, as they discussed the news that the Queen will attend the Cenotaph on Remembrance Sunday.

The 95-year-old monarch is set to watch the event from the Whitehall building balcony.

During Friday’s show (November 12), Naga quizzed the royal editor on the details surrounding the day.

Naga said: “I know so many people will be delighted to know that the Queen is actually able to do what she intended to do.

“Because this is a memorial she never misses.”

Roya responded:  “That’s absolutely right. And for the Queen to honour those who have fallen – and those who are alive – is one of the most important dates in her calendar.”

Naga later went on to discuss the Queen’s involvement on the day.

Alongside a video of the monarch laying a wreath in the past, the host said: “I imagine that may be part of what she is demanded to do, we are seeing her laying a wreath here…

“If she needs assistance will the protocols will be followed?”

“Well, she no longer lays a wreath,” Roya corrected the host.

Well, she no longer lays a wreath

Naga added: “Well, thank you very much for clearing that up.”

The Queen stopped laying the wreath herself in 2017.

Since then, the monarch has watched from the balcony as Prince Charles takes on the duty.

The Queen to attend Remembrance Sunday

Buckingham Palace recently confirmed the news in a statement.

They shared: “As in previous years Her Majesty will view the Service from the balcony of the Foreign, Commonwealth and Development Office building.

“Mindful of her doctors’ recent advice, The Queen has decided not to attend the General Synod Service and Opening Session on Tuesday 16 November.

“The Earl of Wessex will attend as planned.”

Meanwhile, it comes after the palace confirmed the Queen wouldn’t be attending the Festival of Remembrance on November 13.